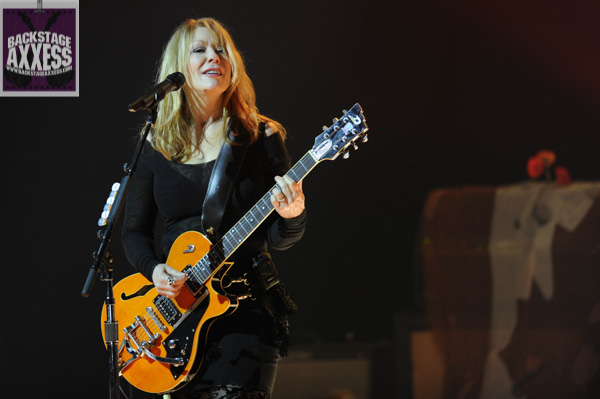 Soon to be inducted into the 2013 class of the Rock and Roll Hall of Fame, Heart is currently on tour across Canada in support of their latest offering “Fanatic.” The tour started on March 9th in Penticton, British Columbia and will stretch until March 25th with a performance in Montreal, Quebec. Tours like this, in the dead of winter, can wear down a band and test their limits but Heart was up to the task. They delivered a knockout blow to the sold out crowd at Massey Hall in Toronto on Thursday night.

Opening with what many would consider a “closer” in “Barracuda” proved instead to be the perfect anecdote to get the crowd (and the band) into it and they didn’t let it go until an hour and a half later with the closing chords to the The Who cover “Love Reign O’er Me.” Not many vocalists sound as good as Ann Wilson (at any age), and true to form, she sounded stellar and got one of the biggest rounds of applause after a breathtaking performance of “Alone.” Her sister and musical counterpart Nancy Wilson handled vocal duties on “These Dreams” and was up to the task of handling both lead and rhythm guitar duties all night long.

What should not get lost is the band of tremendous musicians the Wilson sisters have surrounded themselves with. Drummer Ben Smith has been playing with the Wilsons for close to 19 years. Both guitarist Craig Bartock and keyboardist Debbie Shair have been with them for almost 10 years, while newcomer Dan Rothchild has been with the band for over a year.

Heart’s new album “Fanatic” has some great songs that will stand the test of time and a prime example is “Dear Old America.” The song was written about their father who was a longtime marine. The song is heavy and gritty and is accompanied by heartfelt lyrics. The Wilsons dedicated it to service men and and women who were coming home after serving overseas.

Another highlight worthy of a mention was when Simon Townshend joined the band for a rendition of the song made famous by his brother Pete, The Who’s “Love Reign O’er Me.”

It was also cool to witness the seldom played “Dog & Butterfly” back in the set rotation as well. Earlier this week the band announced they will be teaming up with Jason Bonham for the “Heartbreaker Tour.” They collaborated at the Kennedy Center Honors last December to pay tribute to Led Zeppelin by performing “Stairway to Heaven.” So after an astounding 4 and half million views, why not take this out on the road for everyone to appreciate?

Barracuda
Fanatic
Heartless
What About Love?
59 Crunch
Magic Man
Kick it Out
Even it Up
Dreamboat Annie
Dog & Butterfly
These Dreams
Alone
Dear Old America
Crazy on You

We would like to thank Sacha Guzy from Heart Management and the staff at Paul Mercs Concerts for allowing BackstageAxxess to review the show.