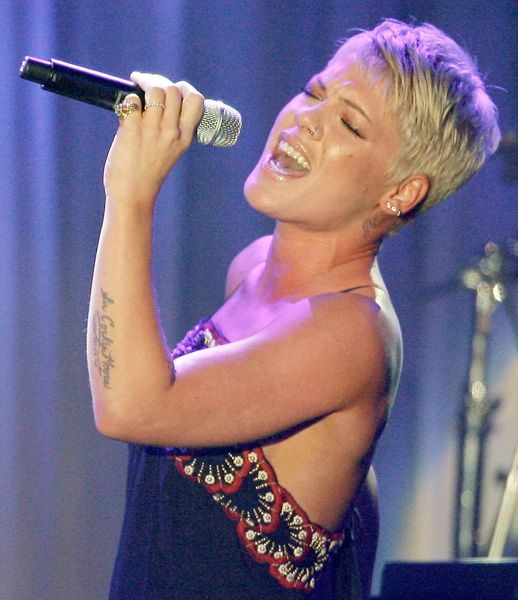 It’s been 3 ½ years since Pink last played here, but recently returned to Toronto to perform before a sold out crowd at the A.C.C. “The Truth About Love Tour” is the singer’s sixth and biggest tour yet. Last August Pink became the newest CoverGirl spokesperson, and as a sponsor of the tour, a short CoverGirl featurette was shown on the screens featuring her beforehand. We also got some entertainment from a very animated Bill Murray look-a-like, who was mingling with the crowd; dancing, chilling with fans and even kissing a couple bald heads. At 9:20pm we were introduced to this man on the stage as Rubix Von Füchenhürtz, the host for the evening. The show started off as a Truth About Love Game Show where Rubix picked a contestant from the studio audience, which just happened to be Pink herself. A short while later the curtain was raised to reveal a two-tier stage which featured two sets of staircases lined with lamp posts, ten video screens, including a heart shaped one in the center, and also a curved catwalk leading out to a heart surrounded by fans in a pit. The opening number “Raise Your Glass,” complete with pryo, had the singer spring up from below the stage high into the air via bungee cords for some flips, spins and other aerial tricks. Below her was her five-piece band, two back up singers and her team of dancers.

“I have to start over, I forgot the words already,” Pink laughed as she fumbled through the first line of “Just Like A Pill.” A fan handed the singer a gift (which looked like a blanket) for her 2-year-old daughter, Willow. She also received a rose and stuffed animal frogs throughout the night. It doesn’t look like motherhood is slowing her down any and she still is in tremendous shape as her six-pack abs were in plain view all night. “This song brings out the worst dancer in me,” claimed Pink, referencing “Leave Me Alone (I’m Lonely)” as she encouraged the crowd to be dorks, explaining that no one had to be cool for the next four minutes. There were also Dork-O-Meters on display to enhance the humor. Another highlight was “Just Give Me a Reason” which was performed as a duet via the video screens with Nate Ruess, lead singer of the band Fun.

Next, Rubix floated through the air as a fairy while wearing a diaper during a musical interlude. After showcasing Mark Schulman on drums (all 47 pieces of them), Pink was given her own mini drum kit and had fun drumming on it for like twenty seconds. A dangerous part of the show came during “Sober” as the singer had no safety harness and was walking around a hanging sphere high in the air. “Family Portrait” was sung just with the accompaniment of Jason Chapman on piano. Two stools were then set up on the catwalk and with Justin Derrico on guitar; an acoustic version of “Who Knew” was performed. After switching to electric guitar, the duo were then joined by two back up singers for a mostly censored “Fuckin’ Perfect” for the benefit of the many younger kids in the crowd. Pink then took a quick second to acknowledge her manager Roger Davies who was celebrating his birthday that evening. After a medley of songs from her 2000 debut “Can’t Take Me Home,” featuring “Most Girls / There You Go / You Make Me Sick,” was belted out, Pink introduced keyboardist/guitarist Kat Lucas, who is from Toronto, and mentioned her whole family was out watching in the crowd.

“Who in here is a slut?” was asked before “Slut Like You” was performed that featured a stripper pole mid stage. Instead of the typical encore break with just crowd noise, Rubix returned for another tongue ‘n cheek monologue where he imitated a preacher. “So What” was the highlight of the night as Pink flew all over the arena including to the back where two towers were set up. It was a sight to be seen, up high and twirling and all the while delivering a solid vocal. In fact I’m amazed the singer can deliver the live vocals as good as she does when she’s upside down and spinning at times. “Glitter in the Air” started off with Pink dressed in an elegant full length golden outfit but it didn’t stay on too long. The singer was then put into a spinning apparatus wrapped in a sheet and was also dunked into a tank of water and raised back up. The show concluded with cool rehearsal outtakes while full tour credits rolled. It was well balanced with song choices spanning six albums and a couple new tracks off the greatest hits release. “Get The Party Started” was missing but I’m sure she’s sick of singing that by now. The two-hour production is a very visual stimulating stage show to say the least. There was thrilling acrobatic maneuvers, big production numbers, fire, pyro, comedy and more! I would say there’s something there for everyone to enjoy, and would highly recommend seeing this tour.

So What
Glitter in the Air

We would like to thank Meghan Kehoe from RCA Records for the ticket to review the show.