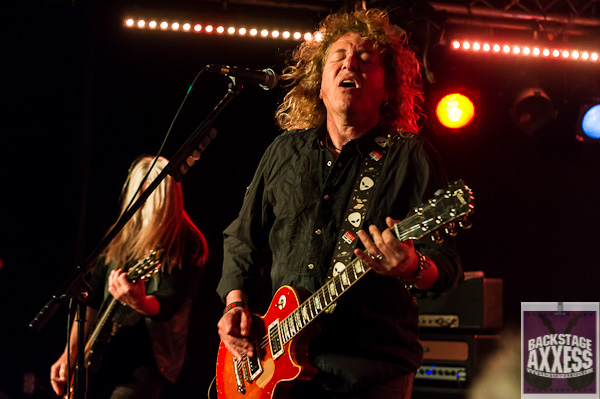 One of my very first concerts included Y&T opening up for Motley Crue all the way back on October 18, 1985 at Maple Leaf Gardens.

Believe it or not, it took the band over 27 years to return to Toronto after that show and they played in front of a packed audience at the Rockpile nightclub. Dave Meniketti on lead vocals and guitar is the last remaining original member as bassist Phil Kennemore lost his battle with lung cancer a couple years back. “I want to dedicate this song as I usually do every night to my best buddy who I miss very much. He would have loved to have been here with you tonight,” Dave poignantly stated, as “I’m Coming Home” was played in his honor. There is also a video for that track and it comes off 2010’s “Facemelter,” which was the band’s first studio album released in thirteen years. Some great musicians make up this band now including John Nymann on rhythm guitar, Mike Vanderhule on drums and bassist Brad Lang. “This is a rare moment for us in the last couple decades but it looks like maybe this might be on our plans for every year to come back,” the singer stated early on to a roaring approval. The band is celebrating the 30th anniversary of the “Mean Streak” album as they played the title track along with “Lonely Side of Town” and “Midnight in Tokyo” from it. “Midnight in Tokyo” was written after their first visit to Japan in 1983 on a headlining tour with openers Loudness and Earthshaker. A fan shouted out requesting “Masters and Slaves,” to which Dave replied, “We’ve been getting a lot of requests for that, we’re gonna have to work that up again, I don’t remember it man,” but he did tease us with a couple lines from it. You don’t realize how many great songs Y&T have, as not even the 135 minute performance tonight could cover them all. Even Meniketti joked that they have too many songs and we would be there for four hours to include them all. Some highlights for me included “Mean Streak”, “Dirty Girl”, “Lipstick and Leather”, “Contagious” and “Summertime Girls.”

The set lists were strategically placed out of plain view, but for the most part the band stuck to it except swapping out two songs. As per a fan request “Eyes of a Stranger” was added and for the encore Brad wanted “Open Fire,” a song they haven’t played in a long time. The band is known to change it up nightly.

Dave mentioned he was proud of the double live CD called “Live at the Mystic” that came out last year, “It’s one of the best things we’ve done in a long time. If you’re gonna get one record I would recommend that one.” After their performance all four-band members came out to take photos and interact with the fans. It’s great to see a band of this caliber in a small club and they still rock after over 35 years in the music business.

We would like to thank Dustin Hardman from Frontiers Records USA for the credentials to review the show.