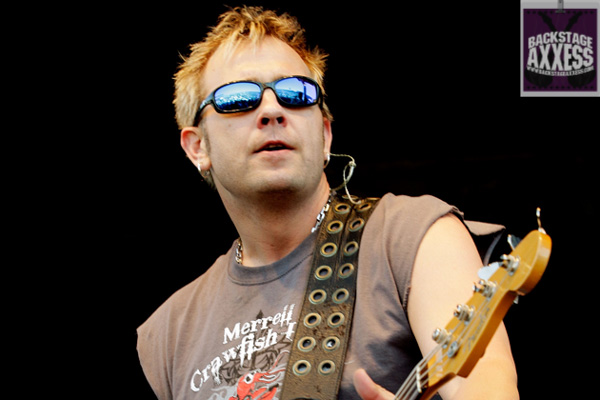 Police have charged the bassist of the rock band 3 Doors Down with vehicular homicide after they said his speeding car clipped a pickup truck, sending it down an embankment and killing the driver.

During a search in the booking room, authorities said, Davidson County Sheriff’s deputies discovered a plastic bag concealed in his sock that contained 8 Xanax pills, 24 oxycodone pills and 4 oxymorphone pills. Harrell also has been charged with bringing controlled substances into the jail.

Police said the pickup’s driver, Paul Howard Shoulders, was not wearing a seat belt and was ejected from his truck. He was pronounced dead at Vanderbilt University Medical Center.

“We are deeply saddened by the passing of Paul Howard Shoulders, Jr.,” said a statement on the band’s website. “Our hearts and prayers go out to his family and friends at this difficult time.”

3 Doors Down may be best known for its song “Kryptonite,” but had a string of hits in the early 2000s, including “When I’m Gone” and “Here Without You.”

Harrell is one of three founding members of the group that formed in Escatawpa, Mississippi, in 1994, according to allmusic.com. The band toured regionally before eventually being discovered at a music showcase in New York.

Thanks to Ed Payne and Anne Claire Stapleton of CNN for this report.