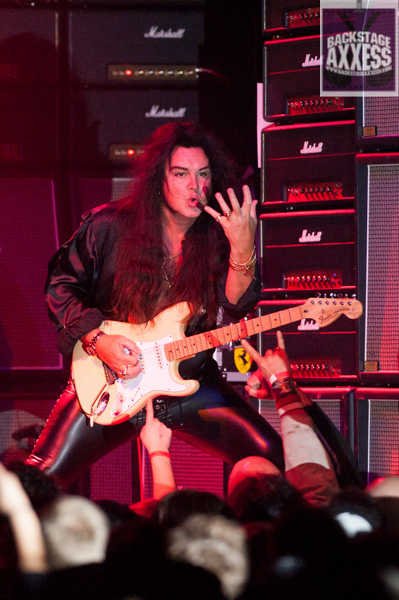 “Yngwie Who? Yngwie Fucking Malmsteen That’s Who!” were the words that appeared on the shirt the guitar tech was wearing on stage and was also available for purchase at the merch table. I think the packed crowd was very well aware of this Swedish guitarist who has been on the scene for 35 years now. Toronto was the third stop on the new Spellbound North American Tour.

In the past there’s been a dedicated front man but this time around keyboardist Nick Marino and bassist Ralph Ciavolino shared singing duties. Rounding out the line-up was Patrick Johanssen on drums. No band introductions were made throughout the night but then again I guess it is all about Yngwie. He owned stage left and was surrounded by a towering wall of Marshall amps. There were 38 heads and 18 cabinets to be exact as a local crew had to start stacking them around 1pm in the afternoon. A diehard fan in the front row proudly held up a sign he made with the saying Yngwie Is God. Rising Force from 1988’s ‘Odyssey’ album got the show rolling with Nick on vocals. Yngwie quickly said “Good evening,” and Ralph took over vocals for “Never Die.” Yngwie was constantly flinging and kicking out guitar picks like they were candy and the tech had to feverishly replace them.

A good chunk of the 95-minute set was instrumental with only seven songs that featured vocal accompaniment. Lots of smoke was used for effect throughout the night. I didn’t think I would ever see moshing or crowd surfing at a Malmsteen show but sure enough both were evident with the rowdy crowd. In fact they got too rowdy at times and without a barrier some fans were messing with the guitar pedals to the dislike of the band and crew. There were some technical issues because of this but Ralph helped pass time by telling a few Canadian jokes including one about Wayne Gretzky. He also changed into a Team Canada jersey later on.

The “Star Spangled Banner” was on the set list but was not performed tonight. We were updated with what Malmsteen has been up to lately, he has just released a book called “Relentless: The Memoir,” his latest CD ‘Spellbound’ is out and you can go to relentlessshred.com and get some guitar lessons from the master himself. The acoustic intro for “Dreaming” was performed by Yngwie on his own signature white Ovation guitar. Not only is he technical with the arpeggios, scale runs, finger tapping, bending and the like, he’s also a showman too. He was swinging his guitar around, throwing it up in the air and playfully using it as a weapon, he certainly didn’t stand still.

“Fugue” featured the guitarist playing on stage by himself and he finished up by ripping out all the guitar strings by hand. Next was a drum solo followed by “Heaven Tonight,” a great song I remember hearing all the time when it came out in 1988. Returning for an encore, the lengthy fan favorite “Black Star” was performed and then the band concluded with “I’ll See the Light Tonight,” featuring Nick on vocals. If you are a seasoned guitar player or even just starting out, I would highly recommend you see Malmsteen live.

We would like to thank Carise Yatter of Hired Gun Media for allowing Backstageaxxess to review the show.