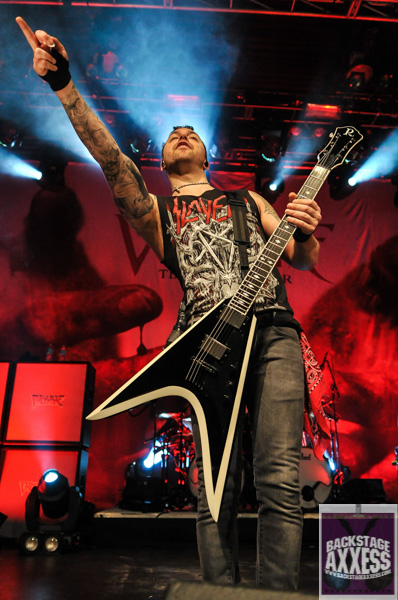 The first of the two was Grammy Award winning Halestorm. Drummer Arejay Hale walked out on stage in a marching outfit with his face concealed. He was also holding onto a snare drum and banging on it until he made his way to the drum kit. Guitarist Joe Hottinger, vocalist Lzzy Hale and bassist Josh Smith were in tow. “Toronto, where’s all my Canadian freaks at tonight?” Lzzy asked before the band opened with “Freak Like Me.” “Rock Show” was dedicated to a special Halestorm fan named Ann who passed away earlier in the day and her family was in attendance.

The ballad “Break In” was stripped down and featured only the singer performing on piano. Most of the 45 minute set had the band sticking to their harder material from both the debut and “The Strange Case Of…” releases. Lzzy has got to have one of the best voices on the scene today and Halestorm just keeps getting better and better.

At 9:30pm the lights went out and Slayer’s “Raining Blood” blasted on the speakers getting the crowd all revved up. (Sadly just last week, original Slayer guitarist Jeff Hanneman passed away) The crowd was also chanting “Bullet” loudly. A huge backdrop hung showing the cover art of the latest album “Temper Temper” just released in February. The opening track from it “Breaking Point” was also the first song performed tonight. This band has maintained the same line-up since 2003 with Matthew Tuck on vocals and guitar, Micheal Paget on lead guitar, Michael Thomas on drums and Jason James on bass. I was a little surprised to see that Matthew cut his hair short after all these years. He asked the crowd for some extra love to get him through the evening as he was battling the flu. His performance certainly didn’t suffer at all. I’ve been following this band since they released “The Poison” in 2005 and love those songs and wish they included more of them tonight. On the other hand, they evolve with every album they put out and that’s a great thing as well. “Riot,” “4 Words (To Choke Upon),” “Scream Aim Fire” and “Tears Don’t Fall” were amongst the highlights for me. Matt started off alone on guitar with “The Last Fight” with the crowd singing along before the band joined in. “Take It Out On Me” was partially performed and as an instrumental instead. “Dirty Little Secret” featured Lzzy Hale coming out mid song to sing with Matt, which was a pleasant surprise. This Welsh metal band is solid from the tight musicianship to the periodic backing vocals from Jason, it all works. “Scream Aim Fire” had the crowd bouncing up and down before the encore break. The band returned with “Pleasure and Pain” and the epic “Tears Don’t Fall” before calling it a night. It seems we got a slightly shorter set tonight clocking in at just less than seventy minutes. At the last minute tonight all the set times were altered by 30-45min, making them earlier.

If you are catching this tour in your city, I would advise showing up early to be safe and avoid disappointment. This is a cool billing featuring four bands in total.

Freak Like Me
Love Bites (So Do I)
It’s Not You
Rock Show
Break In (Lzzy solo on piano)
Familiar Taste of Poison
Drum Solo
Mz. Hyde
I Get Off
Here’s To Us
I Miss the Misery

We would like to thank Livenation Canada for their assistance in helping Backstageaxxess to review the show.