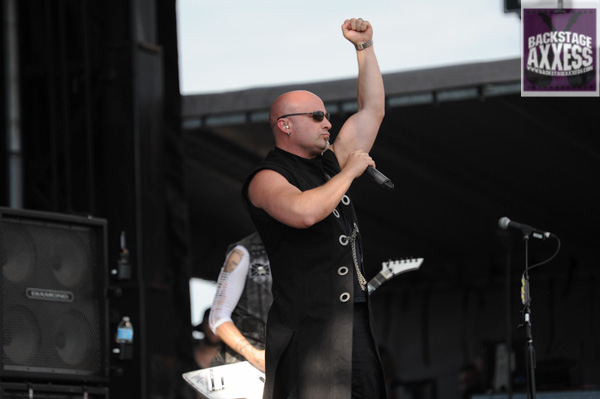 The seventh annual Rock on the Range Festival was officially expanded to three days for 2013. Over the past couple years, Friday featured a pre-party but now we have two stages of music from 4 pm to 11 pm. A third stage was included for Saturday and Sunday. This was also the biggest year yet as the entire weekend was sold out in advance with around 30,000 plus fans each day (105,00 total tickets sold for the entire festival.) What was new this year was the Old Milwaukee Comedy Tent featuring Jim Florentine and other comics performing in the evening. I managed to catch all the main stage acts all weekend but had to choose between one side stage and the other as they primarily ran simultaneously. Many of the bands were available for meet and greets in the autograph alley or at the F.Y.E. tents. There were also vendors selling food, clothing, jewelry and paraphernalia.

Friday on the main “Monster” stage was Love & Death, Hollywood Undead, Buckcherry, Cheap Trick and Korn. The “Jagermeister” side stage had X Factor 1, American Fangs, Mindset Evolution, Oleander and In Flames (this was the only stage that had no video screens). It’s extremely rare for a classic rock band to play Rock On The Range but Cheap Trick represented the 70’s era with style. I’m sure it would be hard to find someone that doesn’t know their hits like “Dream Police,” “I Want You To Want Me” and “Surrender” which were all performed this night. Guitarists Keith Nelson and Stevie D from Buckcherry were invited out on stage to play with the band during their last two songs. Korn concluded the night at 9:50pm with a high-energy 70 minute set. The band seems rejuvenated as guitarist Brian “Head” Welch just reunited with the guys since leaving in 2005 (his band Love and Death kicked off the main stage earlier in the day). Jonathan Davis looks and sounds better than ever and he treated us to some bagpipes before “Shoots and Ladders.”

The Rock & Roll started early, at 11:30 am, for the next two days. Saturday on the Monster stage were Pop Evil, All That Remains, Halestorm, Bullet For My Valentine, Papa Roach, Three Days Grace, Stone Sour and Smashing Pumpkins. The Jager Stage had Scorpion Child, Gemini Syndrome, Heaven’s Basement, Red Line Chemistry, The Sword and Clutch. The new Pabst Blue Ribbon stage featured Young Guns, Otherwise, Motionless In White, Black Veil Brides, Asking Alexandria and A Day To Remember. The Armed Forces came out on the main stage for the National Anthem before Pop Evil got things rolling. May 16th was the third anniversary of the passing of Ronnie James Dio and Halestorm paid tribute to the singer by covering “Straight Through The Heart.” Papa Roach, celebrating their 20th Anniversary, got to add an extra song to their set and musician Tommy Vext helped out on vocals during “Last Resort.” Three Days Grace, now with Matt Walst (My Darkest Days) on vocals, had a great production with a Las Vegas post apocalyptic stage and massive flames. They brought out band assistant Shawn “The Hammer” Hamm to sing for Limp Bizkit’s “Break Stuff.” A Day To Remember had fun closing the side stage with inflated white balls, a t-shirt cannon and rolls of toilet paper. Stone Sour drummer Roy Mayorga suffered a stroke two weeks before the band’s scheduled 2011 Rock On The Range appearance, forcing them to cancel it. It took them two years, but they were back for an explosive 55 minute set and Roy was in fine form. Corey Taylor loved the energy of the crowd; “Bother” featured the singer performing solo on his Les Paul. We also got a Black Sabbath cover of “Children Of The Grave” that the band has only played a handful of times. Smashing Pumpkins had the tough task of following Stone Sour and many fans left before and during their set, leaving the stadium bare in no time at all. Not sure they were a great fit for this festival. Founding member Billy Corgan is the only original member left and it took him 45 minutes before he spoke on stage. He asked the crowd to be careful while crowd surfing and mentioned the last time he got on top of a crowd was in 1992, when he dislocated his shoulder. There were warning signs at each stage to discourage the activity but it’s a huge part of the festival no matter which band was playing. Pumpkin’s set included a trippy version of David Bowie’s “Space Oddity” and they had multiple video screens stacked up in a two-sided pyramid formation on stage.

Sunday had the following bands appear: Sick Puppies, Sevendust, Steel Panther, Skillet, Volbeat, Bush, Alice In Chains and Soundgarden were on the main stage, Big Wreck, Red, Ghost, In This Moment, Device and Lamb Of God were on the Pabst Blue Ribbon stage, the Fox Rocks winner, O’Brother, Beware Of Darkness, Thousand Foot Krutch, Middle Class Rut and Deuce played the Jagermeister stage. Red started their set off with a bang (literally) as a loud explosion went off startling fans before the band came running out on stage. They had one of the most impressive stage shows of the entire festival. Graffiti filled walls, street signs, lamp posts, explosions and some major flames for good measure. No other side stage act had a show of this caliber. It was great to see. Ghost from Sweden were interesting to watch with five out of six members wearing hooded robes and vocalist Papa Emeritus II appearing in a cardinal outfit and skull mask. The identity of the members remains a mystery and the music is comparable to a slowed down Black Sabbath. Skillet put on an impressive performance. They had violin and cello players and two platforms that went up and down beside the drums. Volbeat now features Rob Caggiano (ex Anthrax) on guitar; they paid tribute to recently deceased Jeff Hanneman from Slayer by performing a snippet of “Raining Blood.” I was looking forward to checking out David Draiman’s new band Device and they did not disappoint. The music has a little more industrial feel to it and they performed as a three piece. Maria Brink from In This Moment came out to sing “Close My Eyes Forever” with David, a song originally done by Ozzy & Lita Ford. Lamb Of God was out on their first tour since singer Randy Blythe’s acquittal in the highly publicized manslaughter charge in Prague. He quickly mentioned it on stage and they had one of the rowdiest crowds of the weekend. Gavin Rossdale from Bush went out into the stands singing the Beatles cover “Come Together.” The grunge element got started with Alice In Chains, who had a backdrop featuring different lighting configurations. Jerry Cantrell (now with short hair) took over singing duties for “Your Decision.” All the old hits were covered along with two new songs “Hollow” and Stone” from the upcoming “The Devil Put Dinosaurs Here” out May 28th. The band joked after a false start for “Would?” and the crowd went into a state of frenzy for “Man In The Box.” Soundgarden made their first live appearance in Ohio in nineteen years. They had a video screen that kept changing shape throughout the show while displaying images. I was surprised they played “Outshined” and “Jesus Christ Pose” at the beginning of the set. The latter, according to singer Chris Cornell, is a song about fashion and not religion. The venue video screens switched to black and white for live shots of the band. “Mailman” had a long drawn out intro from Cornell, stating it was a song about a rubber band that gets pulled and pulled and pulled, and pulled some more, you get the idea. Chris sounded great vocally and was very lively on stage. All the staples were performed and the band dug deep, all the way back to the beginning, with “Incessant Mace.” Only one newer song was done, “Been Away Too Long,” the first single off “King Animal.” After eighty minutes, the band left the stage and did not return for an encore, leaving many disappointed. They were, however, a great band to bring the festival to a close.

The one thing people complain about at this venue is the sound. I spent most of the time this year on the floor, in front of the soundboard, and it made a huge difference from being up in the stands. I did however notice that for some bands, including Love and Death and Black Veil Brides, that the sound was way too low. Hopefully this is something they can improve on for next year’s edition. The organizers did a good job bringing in such a variety of talent that appeals to a broader audience. The festival gets bigger and better every year so it’s no wonder why Rock On The Range is America’s premier rock festival. Looking forward to what 2014 will bring.

Get Up!
Got The Life
Freak On A Leash

Them Bones
Dam That River
Again
Check My Brain
Your Decision
Hollow
We Die Young
Down In A Hole
Nutshell
Stone
No Excuses
Would?
Man In The Box
Rooster

We would like to thank Kirstyn Schwartz and Chamie McCurry from AEG, Marcee Rondan from MSOPR and Kristine Ashton-Magnuson from Ashton-Magnuson Media for allowing BackstageAxxess to review the show.