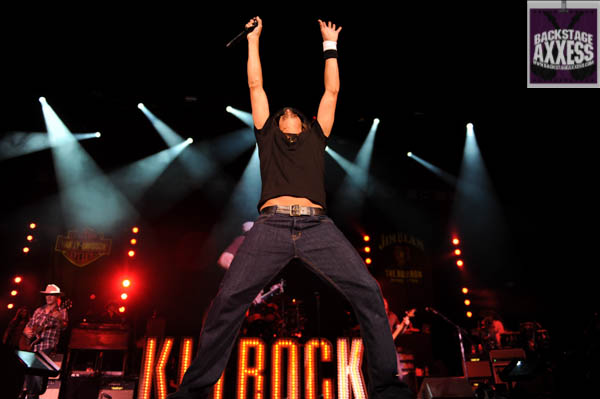 When Kid Rock announced earlier this year that he was going to tour and call it “The Best Night Ever” tour, one might be curious as to why that particular title was chosen. Well, for starters, most tickets will be priced at a mere $20.00; a steal in today’s market which caused people in and around the music business to raise an eyebrow.

Considering the current financial crisis facing most families, pricing most of the concert tickets at a reasonable price seemed like a win-win for all involved. Well, the concert didn’t sell out but 15,000 plus was a healthy showing. The t-shirts and other merch was similarly priced at around $20 or $25 bucks as well.

For this go-round Rock brought his friend Uncle Cracker to open the show along with R&B legends Kool & The Gang to get the crowd pumped up before he took the stage. Uncle Kracker’s set was short but solid. Vocalist Matthew Shafer and his band sounded very tight and everyone seemed to be in a great mood. He played 8 songs including 2 off his new album, “Midnight Special.” Songs came off well live and the band received a good response.

Next up was Kool & the Gang. Skeptics wondered if this was a good fit? After they completed their 55- minute set, that was no longer the case. Many were dancing and waving their arms along with the music. Yes, although Kool & the Gang are mostly associated with wedding music I must admit, the band can deliver it live. With the extra zest of performing in front of his hometown crowd, vocalist Shawn McQuillar got the crowd revved up all night. Yes, all the hits you’ve come to know (and secretly love) like “Ladies Night,” “Fresh” and of course, “Celebrate” were performed; a great set by a still very fun band to watch!

Lastly, was the big production of Kid Rock. Rock has truly made a name for himself over the last 10 plus years as a top notch performer. Rock took the stage behind his massive curtain with just a silhouette of himself showing though. The audience went nuts as the curtain dropped and Rock performed the up-tempo “Devil Without a Cause.” This was a perfect way to grab the attention of all in attendance in one fell swoop. Rock’s high energy and crowd interaction throughout the performance made for a show that was all killer and no filler. Even the ballad “Picture,” where his backup singer “Jessica” joined in, kept the crowd singing along to every word and hanging on every note. Rock sprinkled in his love for his Detroit counterpart Bob Seger as he played “Old time Rock &Roll.” Additionally, what’s a Kid Rock show without him dabbling in his expertise on the turntable, guitar and drums, but it’s when Rock is out front leading the charge, is where is he at his best. Rock even tossed his hat into the audience at one point. It must be mentioned that Rock’s band was enormous. His band consisted of 11 musicians.

On a side note Kid Rock did mention that he wanted regular fans to be up front and not the business person or the non fan who could afford them. Well, before Rock took the stage, I asked a bunch of people in the front 2 rows how they obtained their tickets? They said they were the first people on the lawn at 5:30pm and a guy walked around with stack of tickets looking for people to upgrade. Hint, hint. This may go on at other cities and it maybe in your best interest to try the same formula to see if it works for you. You may end up of just be feet away from the stage to witness one of the most exciting shows of the summer yourself.

We would like to thank Lynn McDonnell from Livenation for her assistance in helping BackstageAxxess review the show.