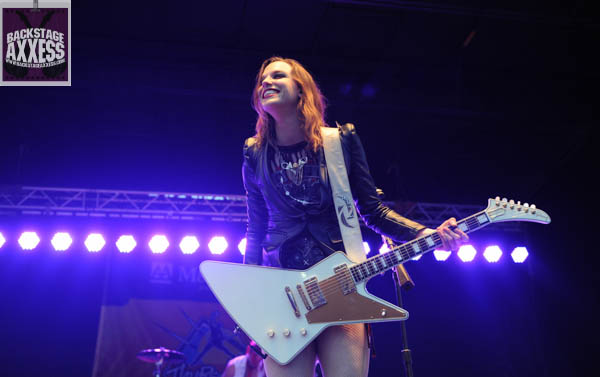 Buffalo, NY-Halestorm, who released their self-titled debut album in the spring of 2009, has apparently cracked the code by scooping up not only a Grammy, but thousands of fans across the globe this year. They made an appearance in Buffalo NY, last Thursday night to play for an enthusiastic crowd of about 8,000 people who were doing their best to keep cool in the muggy August air.

Front woman Lzzy Hale got things underway, with guitar in hand, and started off the set with “Love Bites…So Do I,” the first single from their sophomore release. It seemed to take her a few songs to get comfortable with the crowd and get some power behind her voice, but once she did, the entire band provided a great night of hard rock harmonies.

Lzzy’s bandmate and brother, Arejay, did a commendable job on the skins and turned in a killer solo using oversized drum sticks as a functional prop, which went over well with the crowd, the majority of whom were under age 25. However, some of the 40-somethings in attendance were pacified with a cover of the late, great Ronnie James Dio’s “Straight Through the Heart,” later followed by a version of Skid Row’s “Slave to the Grind.” Both were impressive and served as an appetizer to an upcoming project that Halestorm has hinted will be a full length CD of cover tunes to compliment 2010’s “Reanimate” release of the same vein.

Among the fan favorites of the evening were “Freak Like Me,” “Familiar Taste of Poison” “I Get Off” and “It’s Not You.” As expected, “Here’s to Us,” also got a huge response as Lzzy gave her all to drive the anthem home. This is a really well written song that has been receiving lots of radio airplay and will certainly help to propel the band even farther along in its quest for world domination. As previously mentioned, “Love Bites…(So Do I)” was nominated for a Grammy in the Best Hard Rock/Metal Performance category. Halestorm was awarded the honor, and became the first female-fronted band to both be nominated and win in that category. Thankfully, it seems they have not let the accolades change their attitude towards their fans. Halestorm came out after the show to sign and pose for pictures with hundreds of fans. Other bands, who will remain nameless, should take note! As long as this young band avoids the pitfalls of the rock ‘n roll business, it shouldn’t be too long before the world is chanting “All hail, Halestorm!”

Love Bites (So Do I)
Mz. Hyde
You Call Me a Bitch Like It’s a Bad Thing
Freak Like Me
Daughters of Darkness
Innocence
Straight Through the Heart (Dio cover)
Rock Show
Break In
Familiar Taste of Poison
Drum Solo
Slave to the Grind (Skid Row cover)
It’s Not You
I Get Off

Here’s to Us
I Miss the Misery

We would like to thank Chelsey Northern from Atlantic Records for the photo pass.