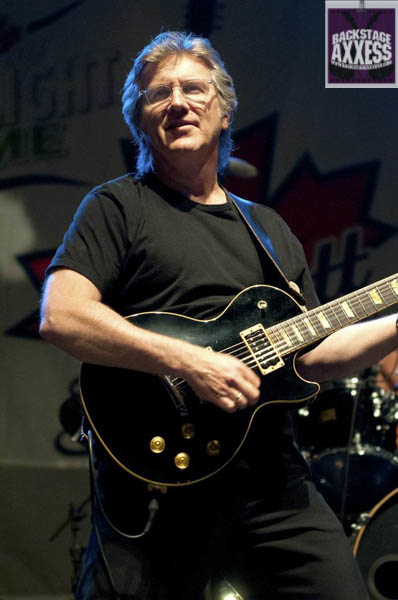 “Money can’t buy it. Politicians can’t touch it. You carry it in your heart. It’s the magic power of the music, and you hold on to it with everything you’ve got!” Those were the passionate words offered by guitarist Rik Emmett as he and his band transported fans back to the Triumph heyday for a solid 90-minute set on Friday night. Starting the show with “Lay it on the Line,” Emmett, now 60-years-old, involves fans in making a game of hitting those high notes, incorporating hand gestures and funny faces in an effort to get the crowd to shoulder the vocal gymnastics. However, it is my opinion that his pipes have held up pretty well, and even if those high notes are a tad out of reach, his guitar playing far outshines any rare vocal blemish.

The night’s set was filled with Triumph classics and a few well-known covers that included “Rocky Mountain Way,” where Emmett turned over lead vocals to his longtime guitarist and collaborator, Dave Dunlop. Mid song, Rik and Dave started their guitar duel and before too long Rocky Mountain gave way to Zeppelin’s “Whole Lotta Love.” At this point the crowd was fully engaged, an appropriate time for cuts from “Allied Forces.” Bassist Steve Skingley took the mic for the hard driving anthem, as Rik and Dave dueled it out again. After some fun commentary, Rik introduced “Ordinary Man,” as the next song up. He holds this song in high regard as one of his personal favorites and considers it autobiographical in nature. For me, as a fan, it is one of the many songs in Triumph’s catalog that still gives me goose bumps no matter how many times I hear it, especially in a live setting.

After a blistering rendition of Clapton’s “Layla,” each band member got some “time to blow,” as Rik referred to it during “Three Clouds Across the Moon,” an instrumental from the Swing Shift CD.

The evening ended with the familiar power chords of “Fight the Good Fight,” and all I can say is that each and every time the boys perform this song, I long for that huge lighted Triumph sign to descend from the ceiling of the arena, and flash in synch to the pounding drum rhythm. It is an image that imbedded itself in my brain a long, long time ago, and will forever resonate deep inside my soul. So regardless if Rik and his talented band of musicians are playing an arena, a club, or a goddamn parking lot , you can bet your ass I will be there. And I know he will be there, because that magic power of which he speaks runs through his veins and in my eyes he is not just an “ordinary man.” In fact, he is quite the contrary.

All Photos by M. Mietlicki.

We would like to thank the Caronia Media Group for the credentials to review the show.