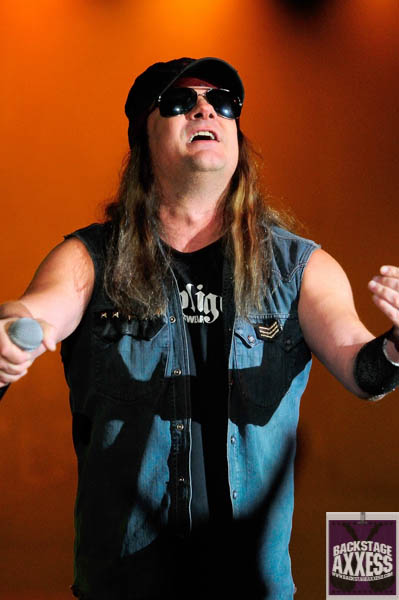 In a quiet, rural suburb just outside of Buffalo, NY a crowd of about 600 rockers came out to see the “new generation” of Skid Row. Consisting of three original members, guitarist Dave “Snake” Sabo, bassist Rachel Bolan and guitarist Scotti Hill, the boys took us for a stroll down memory lane as they performed some of Skid Row’s most popular tunes. Fronting the band since 1999, is singer Johnny Solinger. As the band belted out the ferocious show opener, “Slave to the Grind,” it appeared as if Solinger had forgotten the lyrics when he abruptly stopped singing, turned away from the crowd and bent over the drum riser. He hung his head for a moment, took a sip of water and then proceeded to spew his dinner (which I assume was a liquid one) all over the stage. After a quick wipe of the mouth he continued on to “Big Guns;” brushing off the incident by simply stating to the crowd, “Glad we got that out of the way!”

Um, ok then…on with the show. For most in attendance, this was the first time seeing Skid Row without their notorious and original front man Sebastian Bach. Solinger looked the part, however his vocals seemed forced and somewhat weak throughout the evening. The sound quality at the venue didn’t help much, and in fact may be blamed for the fluctuation in volume from song to song. About 5 songs into the set, Solinger seemed to finally catch his groove and provided a solid vocal for “18 & Life.” Beyond that, he had a few noteworthy screams to rival his predecessor, on tracks “New Generation,” from 2003’s Thick Skin record and again during “I Remember You” and “Monkey Business.” Guitarists Scotti Hill and Snake Sabo took turns showing off their skills; Scotti blazed on “In a Darkened Room,” and the pair turned in a dueling performance to put a succulent cherry atop “Monkey Business.” Bassist Rachel Bolan stepped up to the mic for the aggressive, punk infused “Psycho Therapy,” while Sabo took a moment to genuinely thank the fans for keeping him humble and expressed his heartfelt appreciation for their efforts in singing along to all the songs Skid Row created nearly 24 years ago.

Saliva, who just released a new record last week, entitled “In it to Win It,” offered a short but commanding set. The title track was well received by the crowd, as was their signature song, “Click, Click, Boom.” Bobby Amaru, who took over vocal duties after the departure of Josey Scott in late 2011, proved he is well equipped to front Saliva and if “In it to Win It” is an indication of things to come, than I am excited to see what else these guys turned out in the studio, and I will be picking up the new disk without delay. Amaru made several attempts to engage the crowd, the first of which involved getting them riled up for the upcoming football season. The second was offering an impromptu medley of “teasers” from the 80’s era that included the intro to Dokken’s “It’s Not Love,” followed by “Walk This Way,” “Mr. Brownstone,” and Ozzy’s “No More Tears.”

L.A.Guns, who headlined a show in the area only a few months earlier, returned for a mere blink of an eye with their 5 song set, which included a spirited cover of Black Sabbath’s “Fairies Wear Boots.” These guys are always fantastic live, it was disappointing that they had such a limited time slot (and a blown amp head tube). All in all, it was a great rock show for $30. However, many including myself, felt a little short changed that Guns and Saliva had only been allotted 30 minute set. But they made the most of it, and provided us old skool rockers a glorious end to the summer concert season.

Get the F**k Out
Youth Gone Wild

Ladies and Gentleman
Always
80’s Medley (It’s Not Love, Walk this Way, Mr. Brownstone, No More Tears)
Click, Click Boom
In It to Win It
Your Disease

All Photos by M. Mietlicki.

We would like to thank Ross Catalino from Back 2 Back Entertainment for the credentials to cover the show.