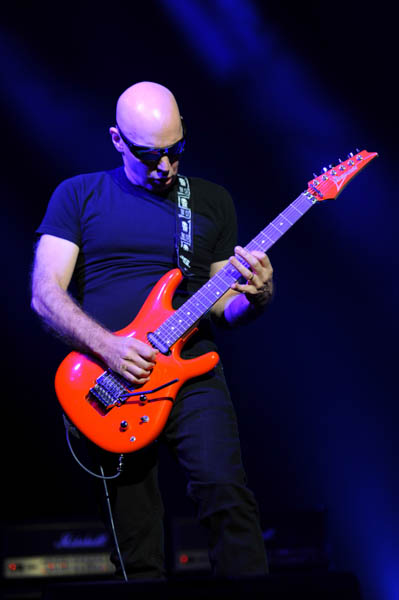 For those eager for the second coming of Christ, it may be a long wait. However, this past Tuesday night could very well have served as a tide-me-over until then.

The intimate setting of the UB Center for the Arts in Buffalo, NY was the perfect venue to witness one of the most celebrated guitar talents the world has ever known. Adoringly referred to as “Satch” by his devotees, Satriani left fans in awe of his prolific skill and mastery of the electric guitar. He picked, plucked and shredded his way through a two hour performance of 20 instrumental compositions, a good portion of which were from “Unstoppable Momentum,” Satriani’s newest record, released in May.

The intensity of the performance combined with the visual enhancements on the king sized LED backdrop provided those in attendance an evening of unadulterated, melodic bliss that bordered on sensory overload.

Satch appeared in high spirits, playing the majority of the set with a sheepish grin. He mentioned a fondness for the Buffalo area, the campus especially, because his sister attended college here, and the pair had common memories of good times shared.

As he played his way through a catalog of flawlessly executed favorites, the other band members also seemed to be enjoying themselves, appreciating both the crowd’s reaction and each other as they jammed. Guitarist and keyboardist Mike Keneally showed off a caliber of playing that proved him more than worthy of sharing a stage with the master and Marco Minnemann turned in one of the most entertaining drum solos I have ever witnessed. He focused a great deal of stick twisting tricks on the array of cymbals before him to the delight of the crowd.

As the final notes of “Summer Song” brought the evening to close, the fans roared their approval and gave our hero a standing ovation that everyone onstage seemed to genuinely take to heart. It was a well earned ovation, as Mr. Satriani treated our humble venue to his very best, able to walk the difficult line of making the performance sound “just like the recording” while still embellishing and improvising on some of his classic phrasing. If the looks on the faces of the fans around me were any indication, it is clear that Joe Satriani still plucks the heartstrings of the guitarist within us all with every joyful note, leaving the fans, if I may borrow a phrase, with “stars in their eyes.” Satriani is not only Unstoppable, he’s untouchable.

The Steve Morse Band opened the show with a variety of instrumental styles and sounds that encompassed rock, country, jazz and classical. Morse fuses these genres seamlessly and is also revered as a guitar genius in the industry, maintaining a loyal fan base for decades starting with his band the Dixie Dregs in the mid 70’s and later playing with Deep Purple. His thick sound and performance of “Highland Wedding” garnered adulation from the crowd. Dave LaRue further engrossed the crowd with his dexterity on the bass guitar.

Jumpin In
Devil’s Slide
Flying in a Blue Dream
Unstoppable Momentum
The Weight of the World
Ice 9
The Crush of Love
I’ll Put a Stone on Your Cairn
A Door into Summer
Lies and Truths
Satch Boogie
Shine on American Dreamer
Three Sheets to the Wind
Cryin’
Drum Solo
Time Machine
Always with Me, Always with You
Surfing with the Alien

We would like to thank Melissa Dragich-Cordero from MAD Ink PR for the credentials to review the show.