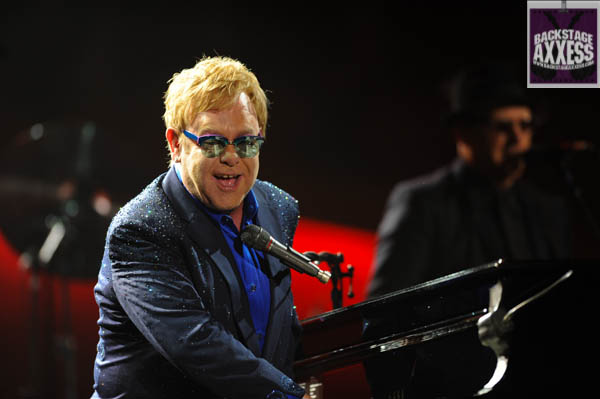 April 2014 celebrates the Rock and Roll Hall of Fame Induction with a giveaway from one of its finest members. Hall of Famer Elton John is celebrating his 40th anniversary of one of the greatest records ever released in “Goodbye Yellow Brick Road.”

Goodbye Yellow Brick Road, the seminal, 1973 breakthrough album, has been remastered and will be issued in a box set featuring recordings of “Live at Hammersmith 1973″on CD, a DVD of Bryan Forbes’ 1973 film Elton John and Bernie Taupin Say Goodbye to Norma Jean and Other Things, along with a 100-page illustrated hardback book packed with rare photos, memorabilia and a new essay containing interviews with Elton John and Bernie Taupin.

Once you do this, you can submit (VIA EMAIL) your entry to contests@backstageaxxess.com. Also submit your Twitter name AND YOUR FULL NAME AND MAILING ADDRESS. This contest will run through April 30, 2014 at 12 noon EST. A winner will be announced and posted immediately thereafter. Good luck!!!

The contest is open to US RESIDENTS ONLY! Please follow the directions closely or your entry will not be counted.