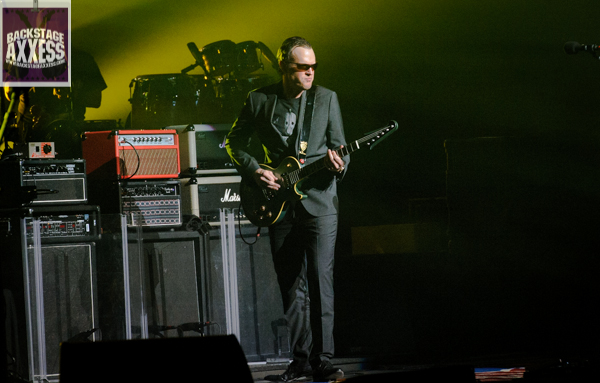 Just a day after his 37th birthday, Joe Bonamassa returned to his native state of New York for an incredible night of music at an historic venue. Bonamassa’a latest outing is a two set affair, starting with an acoustic set and ending with Joe plugging in and cranking it up.

Joe’s professional music career has already spanned an impressive 25 years, and in just the last few, Joe has managed to successfully forge into new territories. While he has made his reputation as the master of the electric fret board with his dazzling blues licks and runs, of late Joe has introduced audiences to his acoustic prowess.

The first set was an expansion of the mini-acoustic set Joe played at the beginning of his “Driving Towards Daylight” tour a couple of years ago. Surrounded by an eclectic mix of instruments and players, Joe opened with two crowd favorites, “Woke Up Dreaming” and his cover of Bad Company’s “Seagull.” Joe finished the set with a version of “Athens to Athens” that brought the roaring fans to their feet.

Joe thanked his fans for birthday wishes and got in a quip about Black Country Communion when he introduced Derek Sherinian, noting that Sherinian was from the “band that only lasted 15 gigs” and then he joked that his mom told him he should not have posted mean things about Glenn Hughes on Twitter.

Sherinian’s presence in the band added a whole new dimension to Joe’s live set. Even though Joe has surrounded himself with some great players over the years, it would be hard to argue that any lineup is better than his current one. Sherinian seems like he was the last piece of the puzzle.

Joe’s electric set was, as expected, nothing short of spectacular. Joe does not have to rely on flashy solos, he plays with incredible finesse, at times sounding like Pete Townshend in his prime. Joe is also not a selfish player, and has the unique ability to sit back and let each band member have his moment in the spotlight.

Perhaps the most impressive part of Joe’s evolution has been the development of his singing voice. Every time I see him live, his vocal parts get better and he has developed a command of his voice that is akin to his proficiency on guitar. His vocals on “Mountain Time” have always been excellent, but on this night, even after performing for over two hours, his vocal performance was truly sublime.

It’s hard to label a show “perfect,” because it almost means that there is no room for improvement. Nevertheless, Joe’s current show appears to be just that, a perfect blend of musical styles from the blues to flamenco and jazz, acoustic and electric, and a light show that added just the right amount visually, in a word, “perfection.”

Of course if there is one musician who has proven for the last 25 years that he is not willing to rest on his laurels, it is Joe Bonamassa. As much as I loved this show, I just can’t wait to see what he does to top it the next time I see him.

Photos by Gus Griesinger. We would like to thank Ryan Romenesko from Jensen Communications for the credentials to review the show.