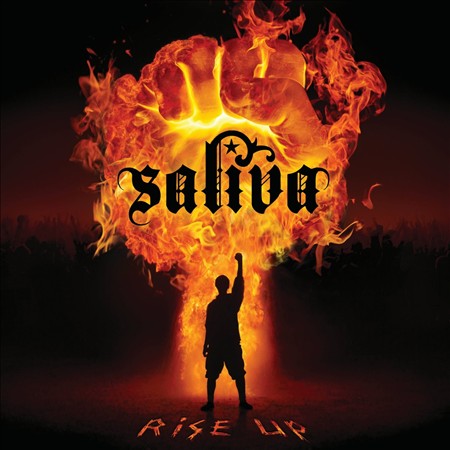 Having seen Saliva play live last summer with new singer Bobby Amaru at the helm, I must admit, I was skeptical he could fill the shoes of frontman Josey Scott who exited the band in 2012. However, once the boys initiated their set, I was blown away. Amaru fit like a glove and delivered a passionate and energetic performance. “In it to Win It,” was one of the new songs the band offered up that evening. It caught my attention and left me wanting to hear it again, not to mention, curious as to what other gems might be waiting to be uncovered with the new band line-up. I am happy to see the song made it on to “Rise Up,” in addition to 11 eleven other tracks, each containing classic Saliva components. From hard driving anthems, like “Rise Up” and “In it to Win it,” pretty much every song has a radio friendly hook that will appeal to the masses. Amaru has a very comparable pitch to Scott, allowing him to satisfy longtime fans of the band, especially in a live setting. Like Josey, he can alternate between guttural screams and a smoother, more melodic delivery with relative ease.

“Red Neck Freakshow” is the most diverse of the tracks, which features a fundamental 80’s guitar riff, set against a thumping, one, two drum beat that is sure to get you nodding along (as you simultaneously knock back that shot of Jager). “Army” has hints of Nickelback sprinkled through it, as do a few other tunes, but then again, proven formulas tend to dominate for as long as the market will allow. “Closer” is the melancholy ballad, which has me predicting this to be the next single released. It seems to me that commercial radio has always kept Saliva on the back burner, which is a shame, because there are many songs found in their prior 7 records that have Billboard charting potential. Plus, they are fantastic live.

“Survival of the Sickest,” is still my favorite Saliva record, probably because it has a lot of 80’s hard rock influence and overtones, however, “Rise Up” has the potential of becoming a close second. It’s a well rounded mix of hard rock harmonies, well balanced guitar solos and powerful vocals that pull it all together.