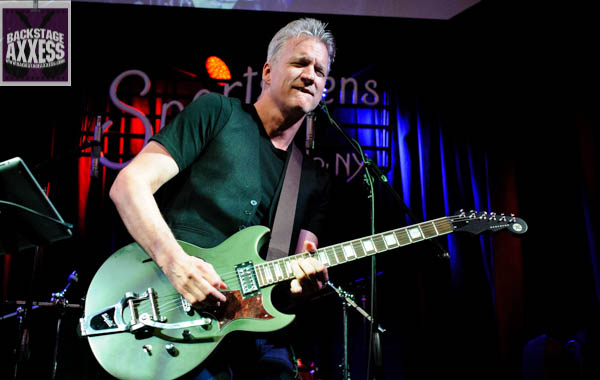 Those fortunate enough to catch an Eliot Lewis solo performance will not be surprised that the show received an excellent review. Lewis, the current keyboardist and regular on “Live from Daryl’s House,” is also a current member of Hall & Oates’ touring band. This former Average White Band member is more than your average sideman.

Having a high profile gig with the likes of Hall & Oates can be a double-edged sword because while it may pique the interest of H&O fans, it’s a harder proposition to get them to see what Lewis’ solo work is all about.

As for Lewis, he clearly loves writing, recording and performing his own stuff, in spite of the fact it would be much easier to sit at home on the couch and wait for the checks to roll in from H&O dates. His show at the Sportsmen’s Tavern in Buffalo proved why Lewis has landed those prominent gigs, his talent and dedication go well beyond the average performer. In short, Lewis is a guy who respects his fans and his craft.

If Lewis comes to town and you are on the fence, keep in mind that you will hear plenty of songs that you know. While his solo material is unquestionably strong enough to carry the night, Lewis doesn’t beat you over the head with it, instead he cleverly intersperses classic covers with original material.

There is a risk/reward in such an approach, because when you are performing songs like “La Grange” and “Rocky Mountain Way” they are not easy to follow up with a song that won’t send your audience scurrying to the bar or to the bathroom.

In Lewis’ case, it pays off because rather than present true to life retreads of covers, he sings them like he wrote them, and by the time he is performing one of his original songs you realize that Lewis is not just a great singer and guitarist, he is a hell of a songwriter as well.

Lewis also did something that doesn’t happen very often anymore, he introduced songs he had recently written. I can say from personal experience that these days, I attend more shows that are filled with songs that I already know, and yet what made me love concerts when I was a kid was when bands performed new material that made me run out and buy the album the next day.

The Eliot Lewis show represented the best of both of those worlds, I got to hear some songs that I already loved, but I was also able to fall in love with original Eliot Lewis songs like “Galaxy Quest” and “Soul of the City.”

If Lewis comes to town, go see him. If you own a small club, book him and promote the show, and I can guarantee you will thank me for the advice. And when he comes back to Buffalo, you can thank me personally because I will surely be up front having a great time.

Photos by Gus Griesinger.  We would like to thank Eliot for the credentials to review the show.