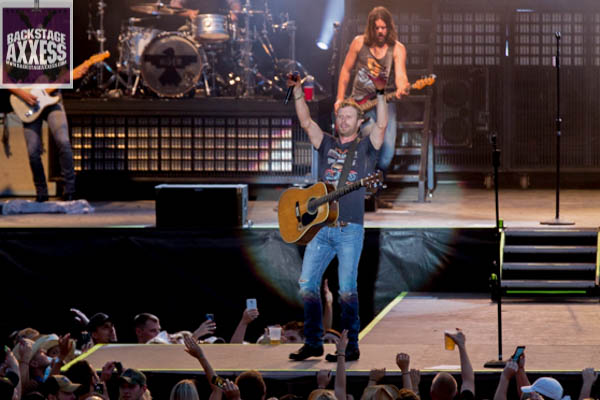 Dierks Bentley loves America. You can just tell by the way he took the stage on his “Riser” tour Monday night August 11th at the Erie County Fair or America’s Fair, as it’s otherwise known. Dierks Bentley’s America is all about plaid shirts, jeans, beer, trucks and girls, preferably ones in little white tank tops. The first four songs “5150”, “Free and Easy”, “Am I the Only One” and “Tip It On Back” set the stage for a party atmosphere and the near capacity infield crowd rose to their feet and never sat back down. Beers were raised in the air and Dierks pointed out the “double fisters” in the crowd and shouted, “This is what it’s all about right here!” The boys and girls in the crowd agreed. The thing about DB is, you feel like a boy or girl at his show. He rollicks and rolls through his songs like a frat boy on Friday night. A favorite night of his by the way.

He brought out the romance with “Come a Little Closer” and instructed all the boys to grab their girls and make out a little bit. Many of them did. Dierks loved it.

The altitude party anthem “Drunk on a Plane” saw two youngsters dressed as airline pilots escorted to center stage to the wild pleasure of the crowd. “I ain’t never seen nothing like that,” shouted Dierks as he led them off the stage. More on our little pilots later. He then followed up with leading the crowd through an acapella sing-a-long of “Plane”, including the not so family-oriented lyrics.

Dierks is also a smart man. He left Bon Jovi’s “Living on a Prayer” out of the show out of respect for the Buffalo Bills fans in attendance.

The heartfelt “I Hold On’ was preceded by the story of DB and his father driving to Nashville in his brand new 1994 pickup truck (which he still drives daily) to launch his career in country music. His father is no longer with us but the results of that trip 20 years ago are now. His father would be proud.

Time to get back to the party. Dierks brought his All American Band downstage and introduced them one by one. Ohio, Indiana, Georgia, Tennessee and Texas were represented. They blasted into what everybody came to hear “What Was I Thinkin”, the song that has everything that makes Dierks Bentley the beloved star he is – especially those girls in little white tank tops.

An encore of “Home” brought the show to a close with a fitting tribute to the American servicemen across the world. As the lights dimmed Dierks ran to his guitar player and struggled his beautiful red and white six-string away and autographed it for the two little pilots mentioned earlier. As he presented it to them, he stepped back to admire what he had just done. He fake-snapped a picture with an imaginary camera and smiled. Leaving the stage as the cute little tykes hustled off with their prize, the crowd went wild and DB was an American Hero, he couldn’t have ended an American Show in a better way.

We would like to thank Holly Smyczynski from the Erie County Fair for the credentials to review the show.