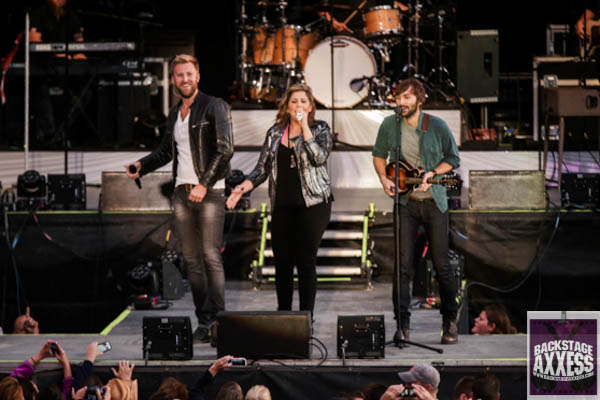 When Hillary Scott, Charles Kelley and Dave Haywood got together and formed Lady Antebellum, little did they know they would become one of the top country music groups. In the last seven years they have taken over the charts, airplay, and awards shows with their talent. A faithful following have adored the group since the beginning and those faithful showed up in large numbers Wednesday August 13th at the Erie County Fair. They witnessed a country music show that has had no equal this season.

A jammed infield and grandstand crowd rose to their feet from the first notes of “Compass” and found it hard to sit down for the rest of the evening. When the Fair comes to town you expect the usual chicken BBQ, games of chance, corny souvenirs, craft show items, crazy rides and fried everything.

This show was a special part of the Fair this year. Lady Antebellum brought their Take Me Downtown Tour 2014 with fine harmonies and multi–award winning songs to a loyal and eager following. The hits like “Perfect Day”, Just A Kiss” and “Love Don’t Live Here” rolled off the stage like a sweet- scented warm breeze on a cool night. In fact, Kelly joked about how “cold” it was being only about 63 degrees at showtime. The crowd laughed when he ran for a short leather jacket that he had discarded only a song before.

A great rendition of the Fleetwood Mac hit ” Rhiannon” by Hillary warmed things up quickly and gave everyone a hint of what was to come. Her strong vocals along with Kelley’s smooth voice blended perfectly in the twilight. Their current single “Bartender” showed a party time side to this finely crafted band. The backing group of top musicians is just as much a part of their success as the leads of Kelley and Scott.

A catchy new tune “Valerie” preceded the show piece of “American Honey” in which Hillary gave a soaring, sweet sounding vocal that was a highlight of the show. More hits like “Run to You” and a bare bones medley of “Goodbye Town”, “Wanted You More” and “Hello World” saw the crowd swaying and singing along.

Turning up the party tunes with “Downtown”, a new “Looking for a Good Time” and “We Owned the Night” brought the regular show to a close with the blast of a confetti cannon and the crowd screaming for more. The band left the stage and a video began playing of “Need You Now”, the biggest song Lady A has had to date. However it wasn’t Lady A singing but a blend of soloists, garage bands, soul groups, choirs, internet wanna be’s and old time lounge singers who appeared on the screens flanking the stage.

It was a great tribute to the popularity of Lady A and their success, even if it was a little self-serving. The video faded to the trio singing their hit with an enthusiastic crowd singing along. The show ended with a blast of Avicii’s “Wake Me Up” cover that saw the crowd jumping up and down to the music long after the group left the stage. Observing the crowd on exiting the show I saw happy faces on everyone who were left with a memory of a great show they would not soon forget.

Need You Now Wake Me Up (Avicii cover)

We would like to thank Holly Smyczynski from the Erie County Fair for the credentials to review the show.