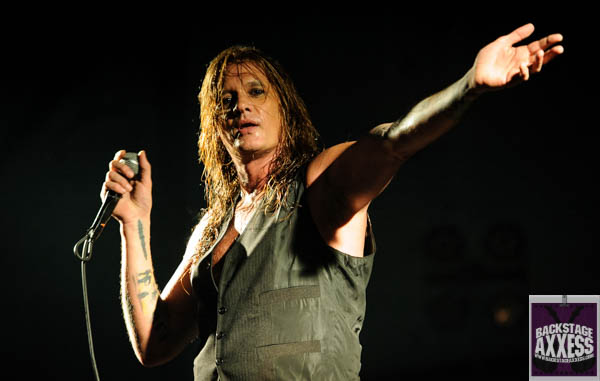 After a respectable sized crowd of “true rock ‘n rollers” had amassed at Braun’s outdoor live music venue in Akron, NY, these fans of 80’s hard rock were sufficiently primed by local supporting acts, Poisoned, Sic Sin and Download, and once everyone had a chance to knock back a few cocktails, Sebastian Bach and his band came out swinging. One of Bach’s signature stage moves includes swinging the microphone around his head like a high speed lasso. Fans seemed to trust that the cord to the mic was securely fastened, as they pushed their way to the front of the stage for “Slave to the Grind.” Bach is quite the animated front man who often engages in comedic banter with his audience. This night was no exception. At various times he taunted fans to put their cell phones away because now it was “time to rock.” He also recanted teenage memories of driving from his home town of Peterborough, Ontario to Buffalo’s Memorial Auditorium to see Iron Maiden, where he claims to have “partied” with the band. He went on to explain how at that particular time he had hair like Nikki Sixx. “Nikki’s my biggest fan,” professed Bach, in a slightly sarcastic manner.

Early in the show, as the band blazed through a collection of Skid Row favorites, Bach was not subtle in expressing his displeasure with the sound board operator, or even his fellow band mates for that matter. However, the kinks were soon worked out and the rest of the performance went swimmingly. In fact, Baz was sweating so much he looked like he just climbed out of a pool, and made reference to the steam that was pouring out from atop his mane of golden locks. It was at this point in the show where he slowed things down to honor Pantera’s late guitarist, “Dimebag” Darrell Abbott. “This was one of Dime’s favorite songs,” he informed the crowd. After leading a chant of Dime’s name, Bach and Co. delivered a poignant version of “In a Darkened Room.” Bach’s tasteful use of the sustained reverb effect enhanced this tune, along with several others throughout the night. There is no denying Bach’s talent as a vocalist, and passion for rock ‘n roll. He takes his craft seriously, consistently devoting 100% of his robust energy to his audience. He is also about “spreading the love.” At one point, when a minor scuffle broke out in front of the stage, he stopped the show to identify the perpetrator, and prompted fans to wave “bye-bye,” to the disruptive jackass, who was escorted out by security. He expressed his wish for more love and less hate in the world, even semi-jokingly ragging on Ted Nugent for a few minutes before he realized he better not say too much or Ted might “kill” him too.

Bach’s guttural screams, charming persona and adrenaline charged performance supplied the crowd with a healthy dose of 80’s nostalgia, and also gave them a taste of his newer material from the recently released, “Give ‘Em Hell.”

He took a little time to mock MTV, who he said sure got their money’s worth out of the Skid Row ballad “I Remember You,” suggesting they change the name of the channel to TMTV, for “Teen Mom TV,” but offering many plugs for its sister channel, VH1 Classic, which still plays videos. The evening was brought to a close with the powerful anthem,” Youth Gone Wild, ” during which Bach plucked a cute 12-year-old girl from the audience to help him sing the chorus. She shared the stage with him for a few bars and then the pair jumped in unison off the drum riser in perfect 80’s fashion, causing a thunderous roar of approval and admiration from the audience. Love him or hate him, there is no question, he loves what he does and so do his fans. It’s apparent by his sober and healthful appearance; he has no intentions of stopping anytime soon!

Photos by Gus Griesinger. Thanks to the staff at Brauns Concert Cove for the access to review the show.