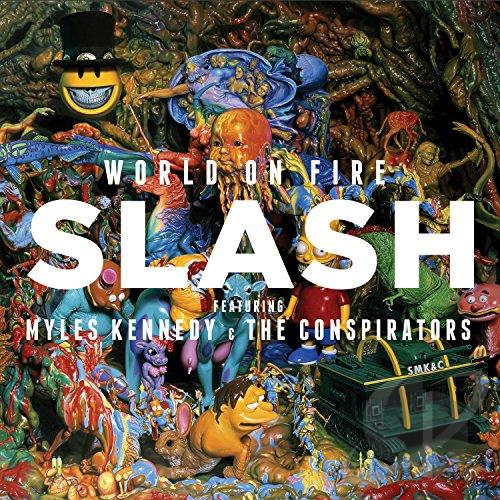 Hold on to your hats boys and girls. Slash is back with a vengeance with his third solo album, “World On Fire.” The album features a total of seventeen hard rock songs and really showcases his versatility as a musician. This is his second outing with Myles Kennedy and The Conspirators and the chemistry between them is out of this world.

The driving beat and anthemic chorus of the first single, “World On Fire,” kicks things off with a punch. This is the Slash we all know and love. But then, things change up with the soft arpeggios that open “Shadow Life” as Slash proves he has a lot more to offer than the standard arena rock singles. Myles shines as a frontman with his vocals driving the mix and he has really found his comfort zone on this album. Slash takes us back to some 80’s style metal with some slide guitar on “30 Years To Life” and on “Withered Delilah,” he is simply outrageous with riff after wicked riff. Other notable tracks are the ballad “Battleground” about the trials of a love relationship and the grinding “Dirty Girl” which is served up with a healthy side of kick ass attitude. Closing things out is the epic and eerie “The Unholy.”

The skill and precision of Slash’s playing has never been in question. We all know he can give us killer metal solos but on this record he shows another side to his playing as well. Holding back a bit at times, he allows the true passion and soulfulness of the music to shine through and that is a very powerful statement indeed. With “World On Fire,” Slash gives us the best of what a hard rock album can be.