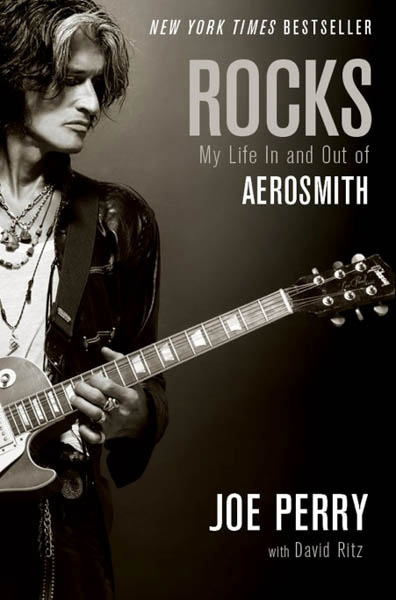 Joe Perry is one of the most successful guitarists in one of the most successful rock bands ever. The Aerosmith guitarist just released his autobiography titled “Rocks: My Life In and Out of Aerosmith” and it immediately went to the top 10 of the New York Times best sellers list. Joe enlisted co-author David Ritz to help him tell his side of the story of what he has been going through for well over 40 years since starting the band back in the early 1970s. The book also describes Joe’s upbringing, his love of the outdoors, and how he deals with family life on the road. Mostly, the book focuses on his dealings with charismatic front man Steven Tyler.

Yes, the book describes how the band got together, how they disbanded and how they arose from the ashes in the mid 1980s to become one of the biggest bands in the world again. To the public, Joe is viewed as the quiet one of the famed “Toxic Twins” but this book can be viewed as a catharsis of sorts. Joe really spills the dirt on Tyler and his antics that caused many of rifts between them through the years. In addition to Tyler, Joe had to sift through multiple management members who took advantage of the band through the years. Joe Perry’s solo project is given some attention as well.

What drives Tyler more than music and more than money? Read the book to find out as Perry calls it as he sees it. The book also includes the creative process behind Aerosmith’s last studio effort “Another Dimension.” After drummer Joey Kramer and vocalist Steven Tyler penned their autobiographies a few years back, it was only a matter of time before Perry put ink to paper. You can say it as an exhale of sorts on Perry’s part, letting the fans know his take on what transpired over the last 40 plus years on one of the greatest rides any band has ever taken.

The book title really fits with what Perry is trying to get out to the public, “Rocks: My Life In and Out of Aerosmith,” and should be viewed as such. A calm, but yet delightful read in the true style of the one and only Joe Cool himself.

Stay tuned for an exclusive interview with Joe and a cool promotional giveaway!