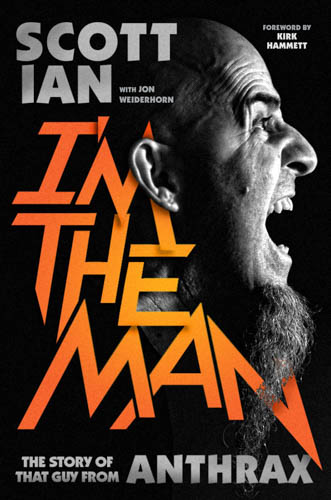 Scott Ian’s childhood in Queens was pretty typical. When he wasn’t skateboarding with his brother and his friends, he was reading comic books or watching horror movies. That is until he happened to hear “Rock and Roll All Nite” on the radio and his focus changed to rock and roll. Scott then began the long and difficult journey of forming Anthrax and making his vision of rock and roll dreams come true.

In his new book, “I’m The Man,” Scott tells us his story from the early years to the recent success of “Worship Music” and everything in between. The book opens with an anecdote from 1997 when Scott was arrested for attempting to steal the on-deck circle from the Yankee’s practice facility in Tampa, FL. It’s a humorous story with some candid truths and serves to capture the reader’s attention from the start. Taking us through the numerous lineup changes and problems with record companies, it’s clear that the road to success hasn’t been an easy one. Despite the difficulties, Scott’s passion for the music keeps him going as he pushes forward even in the most dire circumstances.

Of course, Scott’s story also includes all the good times as well including their groundbreaking cover of “Bring The Noise,” learning to drink with Dimebag Darrell before their tour with Pantera, and playing at Yankee Stadium on the Big Four tour.

“I’m The Man” is an action packed ride through thrash metal history. Through it all, Scott is open and honest about both his professional and personal triumphs and disappointments. Add it to your reading list today.