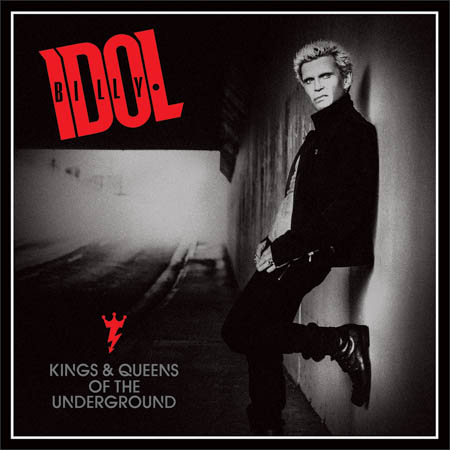 With the help of MTV and a musical partnership with guitarist Steve Stevens, Billy Idol’s career took off like a bolt of lightning in the early eighties. His punk rock image and signature sneer made him a household name as he brought his unique brand of pop punk rock to the masses. Any child of the eighties will remember dancing to his iconic tunes “Dancing With Myself” and “White Wedding.” Billy is back with his first brand new album in over nine years, “Kings & Queens of the Underground.”

The record opens with the mid-tempo “Bitter Pill” with a solid hook and Idol’s classic vocals before launching into the the infectious “bang, bang, bang” chorus of the pop tune “Can’t Break Me Down.” It’s as if Idol hasn’t lost a step with “Postcards From the Past” and “Love and Glory” harkening back to his glory years. It’s the slower tunes where Billy struggles a bit as he attempts to recall his past on the title track and somehow ends up sounding a tad cheesy. He more than makes up for it with the edgier rock of “Whiskey and Pills” which closes out the album. A nice surprise is the bonus track “Hollywood Promises” which has a contagious groove and is by far my favorite track on the album. Production wise, the album sounds terrific with Idol’s vocals sounding as good as ever. For me though, the unspoken hero here is guitar virtuoso Steve Stevens who can shred with the best of them yet has the uncanny ability to give you just a taste of his greatness leaving the listener begging for more.

“Kings & Queens of the Underground” is a solid effort from Idol and it’s great to hear Billy and Steve collaborating on a level they haven’t achieved in many years. To quote Idol himself, “It’s a nice day to start again” and this album is a great first step.