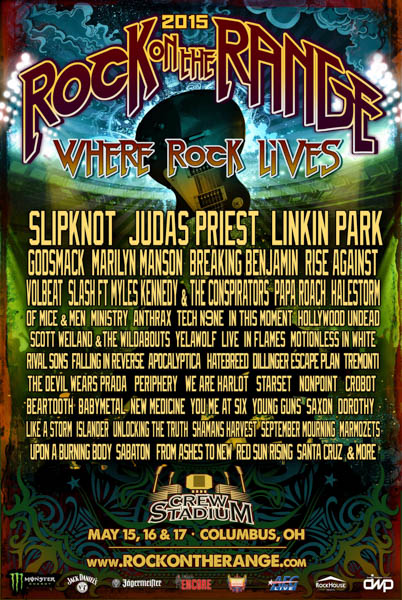 In conjunction with AEG, Crew Stadium today announced the lineup of artists to perform at Rock on the Range 2015, to be held at Crew Stadium from May 15-17, 2015. Headliners include Slipknot, Linkin Park and Judas Priest, who are set to join a full group of acts for the three-day festival in Columbus.

“Crew Stadium is yet again thrilled to continue serving as host to ‘Where Rock Lives,’” said Andy Loughnane, Columbus Crew SC President of Business Operations. “The Rock on the Range 2015 lineup will showcase America’s premier rock music talent, and our venue and city continue to prove that the nation’s elite events belong in Central Ohio.”

Last year’s Rock on the Range festival sold out in advance for the second year in a row, with 120,000 concert-goers at Crew Stadium for the three-day event. This year, AXS TV is set to be on-site to film the weekend as part of its live festival coverage. Also new for 2015 will be the Jack Daniels Old No. 7 VIP Lounge, featuring amenities such as dedicated Wi-Fi, a charging station, private restrooms, premium food options and more.

Rock on the Range 2015, part of the World’s Loudest Month festival series as created by AEG Live, features the biggest names in rock music performing in eight distinct U.S. concert atmospheres in April and May. Last year saw new attendance highs for the World’s Loudest Month festivals, with more than 368,000 fans turning out to see over 150 bands perform, proving that the hunger for rock and metal music in America is growing.