Frank Zappa is known for crazy album cover artwork, bizarre song titles, creatively naming his children, and some of the greatest music ever recorded. Frank passed away in 1993 and left a 60+ album catalog spanning more than 30 years of recording. His oldest son, Dweezil, has been keeping dad’s music alive with “Zappa plays Zappa” since 2006.

Opening his latest tour last Tuesday at the Center for the Arts at the University at Buffalo, Dweezil brought his band of expert musicians to perform “One Size Fits All,” Frank’s last album release (1975) with the Mothers of Invention, plus 75 more minutes of original Frank Zappa music.

Dweezil took the stage and explained this would be “a night for music we have never played before.” The near capacity crowd was buzzing with anticipation. Playing without a break, the next two hours were full of the amazing music of Frank Zappa. “One Size Fits All,” with great songs like “Andy,” “Florentine Pogen,” “Po-jama People,” “Sofa,” and “San Bern’dino” were performed.

Many Frank Zappa songs are classical and/or jazz based with instrumental parts surrounded by interjections of lyrics, chord and time changes, hoots, screams, and hollers, solo guitar runs, piano fills and other musical interludes often sounding like multiple songs in one. All of it making perfect sense as a whole. “Zappa Plays Zappa” tackled Frank’s music and it was an amazing display of musicianship. Dweezil on lead guitar sounds like Frank never left. Ben Thomas (horns, guitar) handled the low end vocal parts and Scheila Gonzalez (keyboards, sax) sang the higher end vocals and both were right on. Both are talented musicians, playing multiple instruments. Fellow band members, Ryan Brown – (drums, percussion, vocals), Ben Thomas – (lead vocals, trumpet, trombone, rhythm guitar), Chris Norton – (keyboards, violin, vocals), and Kurt Morgan – (bass, vocals) are the perfect combination of players, sounding like much more like a twelve- piece orchestra than a six-piece band. After a three song encore, the band stayed on for more than an hour, signing autographs and talking to fans.

“Zappa Plays Zappa” is celebrating 10 years together with this tour. Hopefully they have at least 20 more years together. They will need at least that much time to play the rest of Frank’s music. 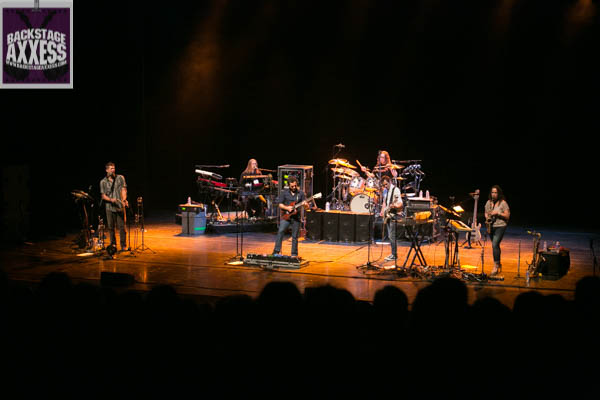 We would like to thank David Wedekindt from UB for the credentials to review the show.