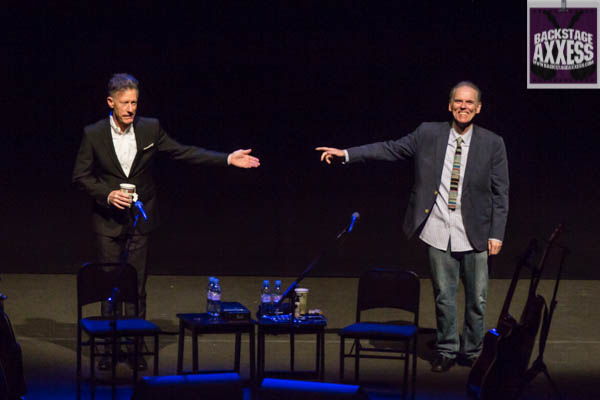 Much of today’s music is a collaboration. It could be between artist and composer, vocalist and band, or arranger and musicians. When Lyle Lovett and John Hiatt take the stage it is a different kind of collaboration altogether. The Center for the Arts at UB was the setting for the latest appearance of Lovett and Hiatt last Thursday night. They tour together every few years and Buffalo has been a frequent stop.

The two artists, with different careers but similar fans, took the stage for what promised to be a great evening of acoustic music and storytelling. They delivered what was a thoroughly entertaining and at times, captivating performance. Alternating their delivery, Lovett and Hiatt were onstage for over two hours and twenty songs. Hiatt began with “Marlene,” setting the pace for a lively exchange between the two men for the rest of the set. Each artist has his own style with Hiatt spinning tales of lost love, life on the road, and philosophical advice and Lovett comically describing a variety of colorful characters and his encounters with them.

Nothing is lost to modern pop music here. These gentlemen are great storytellers and musicians, each a master of his own style. They know how to set the scene for their songs. As you witness this performance, your mind is lost in the moment, picturing the story unfolding as it is magically told onstage.

It’s arguable who might be the more popular artist. This night it did not matter. Applause and cheers met most of their songs and as one sang the other sat quietly, adding back up vocals or guitar. Often commenting on each other’s performance between songs, you can tell they genuinely like each other. Gentle and sometimes hilarious ribbing of each other was often the case and it made the constant guitar tuning more than bearable.

Hiatt sang many songs that were familiar, only because you have heard them covered by dozens of other artists. Songs like “Real Fine Love”, “Long Time Comin’”and “The Open Road” were reminders of how great a songwriter he is.

Lovett played some of his most popular songs and pulled some gems off early albums. The biggest cheers came for “LA County” and “North Dakota.”

There was no slowing these two down as the evening came to a close. Hiatt delivered a spirited rendition of “Icy Blue Heart” and Lovett countered with the hit “Give Back My Heart”.

The encore of Hiatt’s “Thing Called Love” and Lovett’s “If I Had a Boat” truly left the crowd cheering for more. Let’s hope they continue this collaboration for many years into the future.

Through Your Hands (John Hiatt song)

Give Back My Heart (Lyle Lovett song)

We would like to thank Dave Wedekindt for the credentials so BackstageAxxess could cover the show.