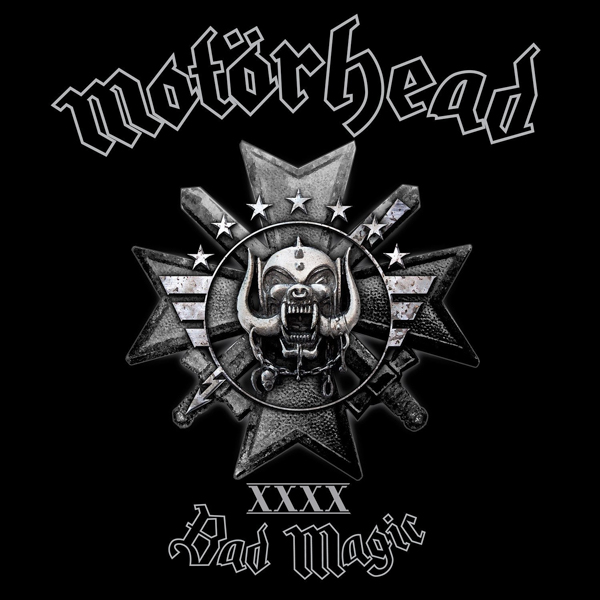 After 40 years of rocking our proverbial asses off, The World’s Loudest Band, Motorhead, shows no sign of slowing down as they are releasing their 22nd studio album, “Bad Magic.” There is nobody in the business who is more rock and roll than Lemmy Kilmister. I mean he practically oozes metal from his veins. Together with guitarist Phil Campbell and drummer Mikkey Dee, Lemmy has put together an album full of top notch balls to the wall tunes.

Written and recorded in the studio with longtime producer Cameron Webb, “Bad Magic” has a raw, live feel. From the opening shouts of Lemmy proclaiming “Victory or Die!” the album is a speedy assault to the senses. Motorhead is a true power trio with Lemmy’s thundering bass, fierce riffs and solos from Campbell, and drums that pound your heart right out of your chest courtesy of Mikkey Dee, especailly on tracks like “Thunder & Lightning” and “Teach Them How To Bleed.” “The Devil” highlights a guest solo from Queen’s Brian May and “Until The End” gives a slightly different feel with Motorhead’s version of a ballad with a not to be missed solo from Campbell. It’s pedal to the metal once again with the blistering “When The Sky Comes Looking For You” before the record closes out with an amazing cover of the Stones’ “Sympathy For The Devil.”

“Bad Magic” is proof positive that rock and roll is alive and doing well. They may not be pretty but they’re pretty bad ass. After all, “They are Motorhead and they play rock and roll!”