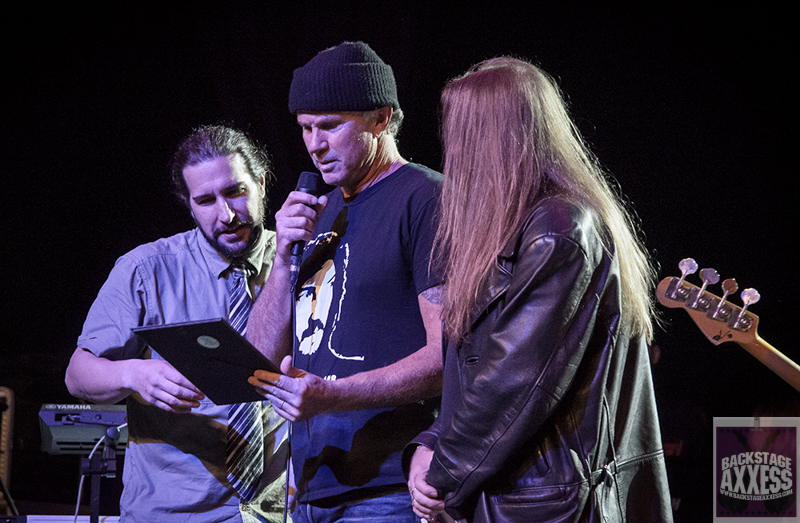 What seems to be building steam over the last few years is the Bonzo Bash which is a tribute to the late great drummer of Led Zeppelin, John Bonham. Musician extraordinaire Brian Tichy and his partner Joe Sutton have created not only this tribute but a handful of others like the Randy Rhoads and Rush/The Who tributes over the last few years as well.

The house band called the Moby Dicks, who again are led by Brian Tichy on drums and guitar, Michael Devin on bass, Chas West on vocals, Brent Woods on guitar and Stephen LeBlanc on keyboards, played for over four  hours. The event was hosted by comedian Bill Burr who also jumped in and played drums on the track “For Your Life” later in the evenings set.

One of the first drummers of the evening, Chad Smith of the Red Hot Chili Peppers, received the Legend award and played “Since I’ve Been Loving You.” Soon after, 19 drummers with 21 in total ended up behind the kit. This year Tichy and his production team really did a great job focusing in on a more diverse group of players. You had everyone from Franklin Vanderbilt (Chaka Khan and Lenny Kravitz) to Greg Potter (Buddy Rich Band) to Joe LaMonde (CEO of NAMM) to Joe Travers (Zappa Plays Zappa and Duran Duran). Their various styles of playing really added to a unique blend of talent to this year’s Bonzo Bash.

Some of the highlights of the set were seeing the reunion of Brad Whitford and Derek St. Holmes take the stage and play a medley of both “Train kept a Rollin'”and “Stranglehold” and then they went into Zeppelin’s “Rock and Roll.” They were having a blast up there playing together again and it showed in their performance. Another highlight was when Carmine Appice didn’t actually play the drums but played the sticks instead with Tichy providing an acoustic guitar on the Led Zeppelin track “4 Sticks.” A variation on the underground favorite which turned out fantastic! The show ended with one of the most underrated drummers on the planet in Korn’s Ray Luzier. He turned in a stellar job on “Achilles Last Stand.”

This is turning out to be one of the must do events while at NAMM. If you’re a Zeppelin fan, drummer or just appreciate the various musical talents of many different artists, you wouldn’t need to look any further than this show. How Tichy learns his parts for both guitar and drums while not only putting this show on, but the other shows I mentioned earlier, is a talent unto itself! The only complaint I would have is that this show tends to be long with the drum set changes and various drummers coming and going. I think if Tichy and his team could figure out how to get it down around two and half hours, it would not only benefit the musicians and crew, the audience would appreciate it too.