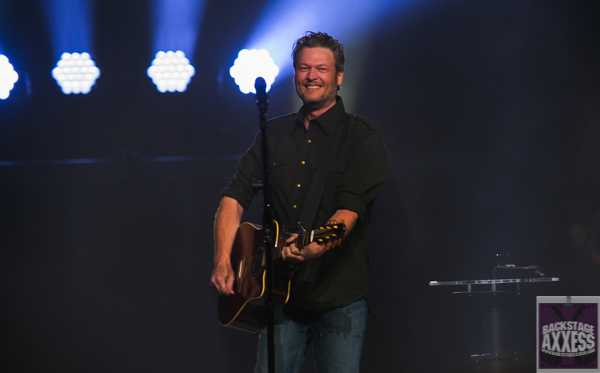 Considering how many tabloids and television shows Blake Shelton appears in and on, one might forget that he entered the public consciousness as a country singer. The 39 year-old superstar’s private life has been on public display for some time now, but that seemed to matter very little to those in attendance during a high-spirited performance in Buffalo,NY, on St.Patrick’s Day.

While many fans were adorned with the standard St. Patrick’s Day accouterments, Shelton appeared in his standard casual fare, eventually donning a green necklace for the occasion (that a fan throw up to him early in the set), and bathing in emerald green lighting from time to time.

As expected, the crowd hung on every note and cheered at the right time, and Shelton responded with the country charm that permeates through his song catalog, often egging on the crowd for more, noting that if he “read a bad review” of the show it would be the audiences fault.

It’s unlikely that fans or critics would pan the artist who is known for sitting in judgement of other singers. Shelton, stated the reason he became a judge on “The Voice” is because he understands what it takes to connect with audiences in person or on record.

Shelton’s show did not come with a lot of overblown effects, the focus was on Shelton’s already hit-filled repertoire, starting with “Neon Light” and ending with “Boys Round Here” before returning with a cover of the Kenny Loggin’s hit “Footloose” and “God Gave Me You” as encores.

The highlight of the evening was the three song solo acoustic set that included Shelton’s first hit “Austin.” Even though there were 15,000 or so fans surrounding him, it did seem intimate. That is no small feat for an artist whose persona is larger than life.

Doin’ What She Likes

She Wouldn’t Be Gone

Mine Would Be You

Who Are You When I’m Not Looking?

Sure Be Cool If You Did

God Gave Me To You (Dave Barnes cover)

Photos by Gus Griesinger. We would like to thank Mary Catherine Rebrovick from Warner Brothers Music from the credentials to review the show.