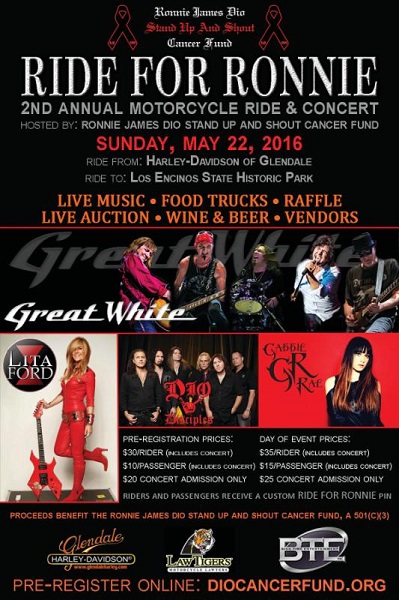 The 2nd Annual RIDE FOR RONNIE Motorcycle Ride and Concert, benefiting the Ronnie James Dio Stand Up and Shout Cancer Fund, will take place on Sunday, May 22, 2016.  Riders will assemble for a continental breakfast at Harley-Davidson of Glendale with kickstands up at 11AM.  The RIDE will take them through the streets of Los Angeles County to Los Encinos Park in Encino, where they will be treated to an afternoon of live music, raffle and live auction, food trucks and more.  The Inaugural Ride, held in May 2015 as part of a weekend of events commemorating the fifth anniversary of the passing of Ronnie James Dio, contributed to raising $155,000 for the cancer charity from that weekend’s events.
Live entertainment in the park will be provided by rockers GREAT WHITE, LITA FORD, DIO DISCIPLES, GABBIE RAE, BUDDERSIDE, SONIA HARLEY and DOCTORS OF THE EARTH. The event will be hosted by DJ WILL.
A live auction will be held during the concert that will include a donated stage guitar that Chris Broderick of Act of Defiance played during his time with Megadeth (as well as autographed photos of Chris playing the same guitar) and a B.C. Rich guitar signed by Ronnie James Dio, Rob Halford (Judas Priest), Bruce Dickinson (Iron Maiden), King Diamond and Geoff Tate.
The Ronnie James Dio Stand Up and Shout Cancer Fund hosted a free street party on March 5 at Harley Davidson of Glendale to pre-register riders for the 2016 RIDE FOR RONNIE event and to draw the winning ticket for a one-of-a-kind “Holy Diver” motorcycle with 100% of the net proceeds going to the fund.  “Boston” Tom Foresteire of Northridge held the winning ticket and will lead this year’s RIDE on the 2015 FXDB “Street Bob” model Harley-Davidson that was custom-painted with the illustration from the cover of Ronnie James Dio’s iconic “Holy Diver” album.
Both riders and concert-goers can purchase their tickets by visiting: www.diocancerfund.org/events
Pre-Registration Prices:
$30/rider (includes concert admission)
$10/passenger (includes concert admission)
$20 concert admission only
Day of Event Prices:
$35/rider (includes concert admission)
$15/passenger (includes concert admission)
$25 concert admission only
2016 RIDE FOR RONNIE Motorcycle Ride and Concert Schedule
Sunday, May 22, 2016
Ride:
9:00am – 10:45am:  Rider Check-In & On-Site Registration
9:00am – 10:30am Continental Breakfast
Kickstands up at 11:00am
Harley Davidson of Glendale
3717 San Fernando Rd., Glendale, CA 91204
Concert:
11:30AM – Gates open
11:45AM– 5PM  Concert
Los Encinos State Historic Park
16756 Moorpark Street Encino, CA 91436 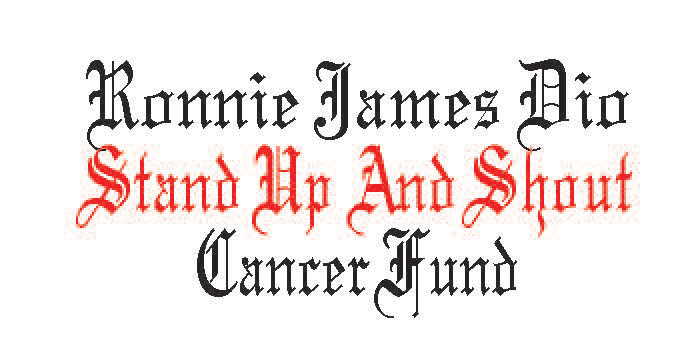