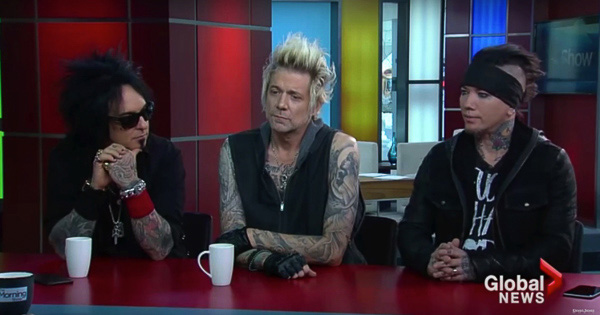 (NEW YORK, NY, April 20th, 2016) – Hard-rock trio, SIXX:A.M. recently released the first single to their upcoming global release, Vol.1 Prayers For The Damned, “Rise”, which is currently dominating the Rock Charts at #7 and rising. “Rise” is ultimately a song that implores the general public to open their eyes, go against the grain, and stand up. “Throughout history, some of the most dramatic changes have occurred when people reject the status quo and demand change, a sentiment completely encompassed by the musicianship, lyrics, and passion of ‘Rise'”, Nikki Sixx explores. James Michael goes on to explain, “‘Rise’ is about how we find ourselves at a global tipping point and how it is our duty as citizens of this world to come together, communicate with one another and rise up to demand more of ourselves and our leaders.” While not a political band, SIXX:A.M. know it is time for us to all unite for the changes we want to see happen in the world and are ready and willing to spearhead the movement. As “Rise” urges:

During a recent interview live on CNN with Brooke Baldwin, Nikki Sixx urged citizens to look at their surroundings, see injustices, and stand up to them, including the current volatile presidential election, the increasingly horrifying heroin epidemic, and more. We all have our “#ReasonToRise” and the men of SIXX:A.M. are asking fans to share what makes them raise their fists and act.

Taking their heavy-hitting message on the road, fans can find the band kicking off their global festival circuit with a strong performance at Welcome to Rockville on April 30th. SIXX:A.M. will also be performing fan favorites, new and old, on the Vol.1 Prayers For The Damned tour cycle which will include seven major rock festivals in Europe, a headlining tour beginning May 3rd in Nashville, TN, and many more dates soon to be announced. For more information on tour dates and the band, please visit www.sixxammusic.com.