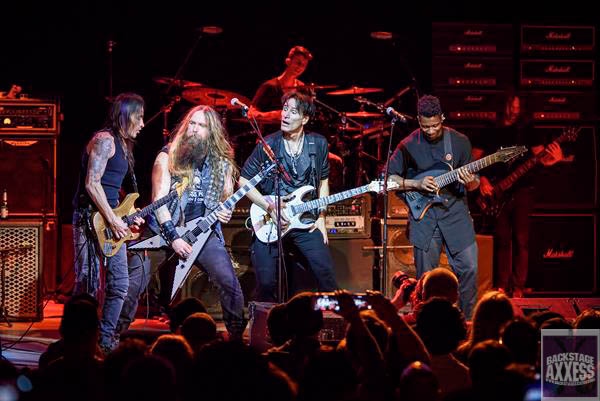 Last Wednesday, on International Star Wars Day, Massey Hall was graced with an out of this world performance from five uniquely talented guitarists as part of the Generation Axe tour. The guitar quintuplet consisted of Steve Vai, Yngwie Malmsteen, Zakk Wylde, Nuno Bettencourt and Tosin Abasi. Each a standout performer on his own, the five artists came together to create a night of memories and pure six string madness. The three and half hour performance was nonstop and had the five guitarists performing collectively as well as showcasing their own unique genre of guitar playing with individual sets.

The night kicked off with all the members of Generation Axe performing an extended version of Boston’s “Foreplay.” The song featured a solo opportunity for each guitarist to take a moment in the spotlight and to unleash his ability, undeniably proving why each was worthy of sharing the stage with their fellow axmen.

After the opening number, Vai, Malmsteen, Wylde and Bettencourt left the stage as Abasi began his mesmerizing solo set. An eclectic mix of progressive rock and metal, Abasi performed a selection of songs from his band Animals As Leaders. Abasi represents a new direction in the world of electric guitar as his innovative style made fans out of those who were new to his music. To close off his set, Abasi invited Nuno Bettencourt onstage to perform “Physical Education,” a tune that saw both guitarists pushing themselves to the limit and creating a supersonic experience.

Following the dual performance, Bettencourt commenced his solo set with the Extreme hit “Get the Funk Out.” The classic had the crowd standing tall and singing along to the ’80s anthem. Bettencourt played a diverse set switching from the electric guitar to the acoustic guitar and back. During the acoustic portion of his set, Bettencourt teased the audience with the opening to “More Than Words,” but stopped short saying “Nah, not tonight. Tonight is a night of guitar.” Bettencourt also shared a range of stories from his experiences with the Generation Axe members, which gave the audience a unique and comedic glance into the lives of those on the tour. For Bettencourt’s last song, Zakk Wylde joined him and shared vocals for a stirring rendition of “Sideways” by Citizen Cope.

Judging by the number of Black Label Society shirts in the audience, a large portion of those in attendance had been waiting with anticipation for Wylde’s set. Taking on the role of guitar and vocals, Wylde’s performance had the crowd head banging from beginning to end. Opening with the Black Sabbath classic “Nativity in Black,” the fans jumped to their feet with devil’s horns in the air. Wylde’s set consisted of a number of covers that the muscled guitarist put his own aggressive spin into. The highlight of Wylde’s performance for me, and perhaps one of the most memorable moments of the night, was when he left the stage to be with the fans for a pair of solos during Jimi Hendrix’s “Little Wing.”

Wylde was followed up by Yngwie J. Malmsteen, whose set had him performing all that one would come to expect from the Swedish rock god. Filled with shredding, high kicks and guitar spins, Malmsteen’s style is a full body experience. Channeling the emotion from his face to the guitar and back, Malmsteen is a true artist. Unleashing on the audience both old and new songs, Malmsteen had everyone staring with awe with what one can do with the electric guitar. To close out his set, Malmsteen invited the final guitarist of the night, Steve Vai, to help him with the 1984 guitar odyssey “Black Star.”

Steve Vai, who has been leaving his mark on the world of guitar since the late ’70s, was tasked with performing the last individual set of the concert. Vai had the audience entranced with his guitar playing, carving out solo after solo on songs such as “Now We Run” and “Gravity Storm.” Throughout the performance you could tell that Vai was enjoying himself and that enjoyment was reflected by the faces in the audience. Vai is truly a generational talent and songs such as “Tender Surrender” show the range of his playing style. For his last song, Vai invited the night’s first guitarist, Tosin Abasi, to join him onstage to exchange licks on “Building the Church.”

The final two songs of the night saw Wylde and Bettencourt join in for Edgar Winter’s “Frankenstein” and then Malmsteen came on to round out the lineup for the Deep Purple hit “Highway Star.” The songs were a fitting bookend as it allowed each guitarist to solo and perform together as they had started. Being born in the ’90s and going to high school in the mid 2000s, my friends and I would get together all the time and play Guitar Hero. Wednesday night at Massey Hall, I had the privilege of seeing five real life Guitar Heroes and as a member of the so called Generation Y, I would not miss out on seeing Generation Axe.

Photos by Sue Sadzak. We would like to thank Steve Karas from SKH Music for the credentials to review the show.