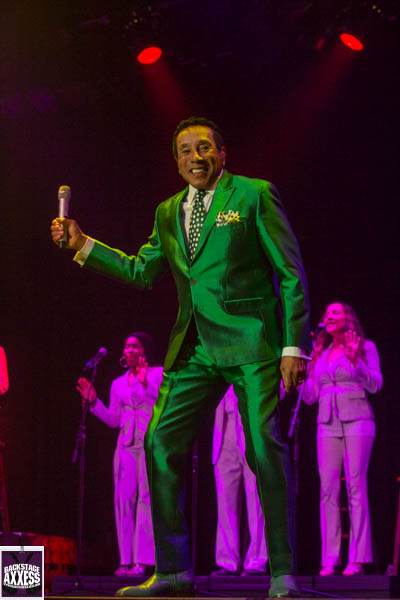 There is no denying the 76 year-old William “Smokey” Robinson holds a special place in the history of popular music. He was signed to a recording contract by Berry Gordy before Motown Records existed. By the time he was 15 years old, he had written over 100 songs. He led the Miracles in many top hits. He wrote many of the early Motown hits such as “My Girl”, “Ooh Baby Baby”, “Tears of a Clown” and “Shop Around”. And then there is his voice, a sweet blend of high end honey and smoothness that has gone unmatched to this day.

When Robinson played the Seneca Niagara Casino last Saturday night, it was definitely the place to be. The sold-out show started a little late as fans found their seats. The opening notes of “Being With You” by his 6-piece band and 3 back-up singers filled the room and Robinson started singing off stage. As he appeared out of the shadows, the crowd roared with one of the many signs of appreciation exhibited this evening. His voice in great form, Robinson’s delivery was as smooth as the silk that made up his bright green suit. Notable was a change in tempo for most of the songs he sang this evening. It was slower, sexier, and perfect for the mood of the night. This was a show about love and music, something fans of the genre in attendance made clear by the hoots, hollers, and screams for every song.

The set list played out like a greatest hits album. “I Second That Emotion”, “You’ve Really Got A Hold On Me”, “Quiet Storm” and “Ooh Baby, Baby” followed and it felt like Smokey was in complete control. He stayed with the older songs with a Temptations medley that brought the crowd to its feet. As Robinson transitioned into to some recent recordings, the crowd had some silent moments as most did not recognize “Love Bath” or the super-sensual “That Place.” Once Smokey put his sexy style on them, it made this reviewer wonder why I haven’t picked up these recordings. They were as good as any he’s written.  The night ended with a extended “Crusin” as Smokey brought two fans onstage to lead a contest of sorts as to what side of the room could sing it better. The “contest” ended up with everybody winning.

The same could be said for the feeling of the whole show. Everybody felt like winners having seen the classic Smokey Robinson perform. Most of the fans in the room were young when these songs were popular. Having a chance to re-live those younger days with Smokey doing the singing made you forget about your problems for a couple hours. The
only complaint: it was over too soon. Time to break out those old records and remember the good times. Thanks Smokey.

I Second That Emotion

You’ve Really Got A Hold On Me

The Tears Of A Clown

Fly Me To The Moon

Just To See Her

The Tracks Of My Tears