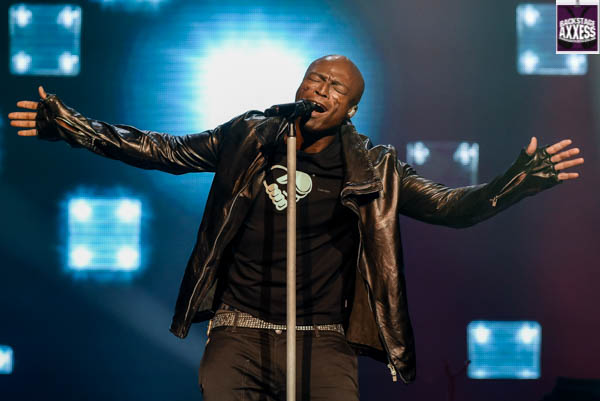 Last Thursday night, the British soul singer Seal performed his first of two shows at the Avalon Ballroom in Niagara Falls, Ontario. Having just played Europe and parts of the United States, Seal played a two hour show filled with the talent and unquestionable vocal range that has made him a household name for over the last two and a half decades. Bringing a mixture of hits, new songs, covers and surprises, Seal delivered a memorable evening for all in attendance.

Opening the show by going back to his roots, Seal started with “Killer,” the song that launched his career. Followed up by a trio of songs from his newest release, 2015’s “7”, the grouping of songs showed that the singer has not lost touch with his ability to make powerful music. Especially noteworthy was the ballad “Do You Ever” which resonated with the audience and had some in tears. Throughout the night, Seal’s singing was complimented by beautiful visualizations on a digital screen behind the performers which helped add to the overall atmosphere.

During the set, Seal inserted covers that were given his soulful touch, including Hall and Oates’ “Sara Smile” and David Bowie’s “Space Oddity.” One of the highlights of the set was Seal’s stirring rendition of Tears for Fear’s “Mad World,” in which the explosive ending had the hair stand up on the back of everyone’s necks. Seal, throughout the night, did not waver in his vocals and his backing band  harmonized with him to create a powerful sonic experience.

Earlier in the summer, when Seal was in Montreal, the singer came across a busker named Jason Deeh Pitre.  Deeh Pitre was playing songs to those who passed by in a popular square in the city. Touched by the man’s voice, Seal joined the busker in the square and sang an impromptu version of “Stand by Me.” This moment was captured on video that later went on to be a viral video over Youtube. After being joined by Seal in the busy Montreal square, Pitre had the opportunity to join his idol in Niagara Falls to sing a few songs. Performing Chris Isaak’s “Wicked Games” and “Stand by Me,” the duet received the loudest applause from the audience all night.

Despite reaching superstar status, Seal proved that he is still humble and was not beyond interacting and playing with the audience. He’s both, a showman and outstanding singer, truly the complete package. On hits such as “Kiss from a Rose” and “Crazy” he did not miss a beat and reassured us convincingly that he is far from stopping. Though he joked with the audience that perhaps his age is getting to him, Seal proved that he is still sharp and sounding as good as ever.  Make sure you see him whenever he comes to a city near you. You’d be crazy not to!

Prayer for the Dying

Life On the Dance Floor

Kiss From a Rose