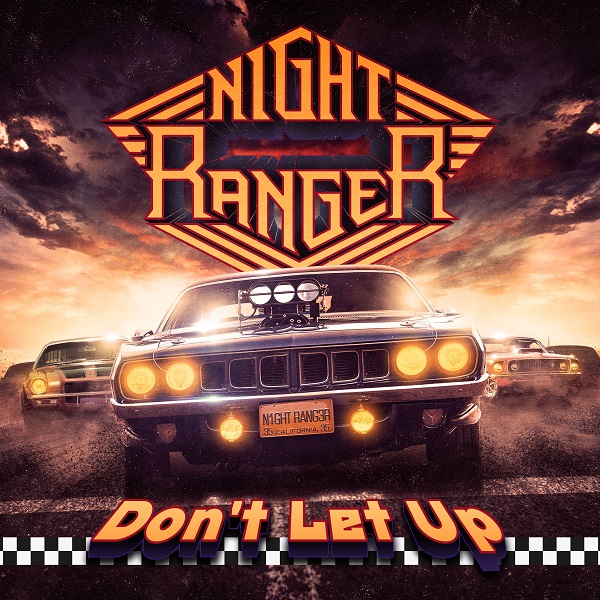 Frontiers Music Srl is proud to announce the release of “Don’t Let Up”, the new studio album from Night Ranger. “Don’t Let Up” is set for a March 24th release. The album will be available in both a standard edition and a deluxe edition (featuring bonus track and bonus DVD – physical format only). For your first taste of new music from the album, check out “Somehow Someway”

‘Somehow Someway’ is all Night Ranger. It not only captures the spirit of our live shows but also is the essence of who we are and who we have been for the last 35 years…a kick ass American rock and roll band…case closed,” says Jack Blades, bassist and vocalist .
Adds Kelly Keagy, drummer and vocalist, “[t]he song “Somehow Someway”  is an up-tempo rocker with an infectious, big guitar lick. Take caution while you’re driving in your car, you may find yourself going WAY over the speed limit. Check it out!”
“Our new single, ‘Somehow Someway’ is a rockin’ barnburner up to the standards of our first single, “Don’t Tell Me You Love Me”. This could be a great song to perform live and add to our setlist….Enjoy!!” encourages guitarist Brad Gillis.
Pre-order “Don’t Let Up” and/or stream the first single here: http://radi.al/NightRangerDontLetUp or at the links below:
– Amazon: http://radi.al/DontLetUpAmazon
– iTunes: http://radi.al/DontLetUpiTunes
– Google Play: http://radi.al/DontLetUpGooglePlay
– Spotify: http://radi.al/DontLetUpSpotify
Night Ranger truly epitomizes the sound of the 80’s, while at the same time transcending it. Since their reunion in 1996, they have brought their guitar heavy, melodic brand of hard rock into the 21st century with their unparalleled talent, energy, and creativity.
The new album, “Don’t Let Up” was self-produced by the band.
“The “Don’t Let Up” album is the result of five musicians living and breathing rock ‘n roll 24 hours a day. 35 years on and Night Ranger is once again ready to let the fans know “It’s Only Rock and Roll, but I like it,” says Blades of the new album.
Keagy adds, “Working on the material for the new album “Don’t Let Up” was a great experience once again. I always look forward to creating music with Brad, Eric, Kerri, and Jack. I’m really looking forward to playing some of this material for the fans. It rocks!”
“I’m looking forward to the new Night Ranger studio effort ‘Don’t Let Up’ as it’s always a pleasure releasing new material to keep the bands creative flow. As typical for NR, we have all the elements that made us popular in the first place, including twin lead vocal tradeoffs with Jack and Kelly and dual guitar harmonies and solos with my new partner in crime, Keri Kelli. We’ve stacked the deck again with up tempo driving rock songs, mid tempo tunes and a few acoustic ballad tracks. We’re hoping this new album will be added to your existing Night Ranger catalog!!!” enthuses Gillis.
With more than 17 million albums sold worldwide, over 3000 live shows performed, and more than 1 billion in radio audience, Night Ranger has both epitomized and transcended the arena rock sound and style of that era and beyond. With songs that have significantly impacted popular culture and continue to expand their ever-growing fan-base, Night Ranger is proof that powerful songs, plus accomplished musicians is the perfect formula for continued success.
Night Ranger has earned widespread acclaim, multi-platinum and gold album status while leaving their indelible mark on the music charts with a string of best-selling albums (Dawn Patrol, Midnight Madness, 7 Wishes, Big Life and Man In Motion), its popularity fueled by an impressive string of instantly recognizable hit singles and signature album tracks. Producing legendary hits such as “Sister Christian”, “Don’t Tell Me You Love Me”, “When You Close Your Eyes” the anthemic “(You Can Still) Rock In America”, along with “Sentimental Street”, “Goodbye”, “Sing Me Away”, “Four in the Morning” and more.
The band was also one of the first big “video” bands, with over 10 number 1 videos on MTV.
Over the years, the band’s music has made notable contributions to and been featured in many different areas of media and popular culture. Night Ranger‘s songs can be heard in TV Shows; The Unbreakable Kimmy Schmidt, American Dad, Glee, Grey’s Anatomy, Parks & Recreation; Rock Band, Guitar Hero and Grand Theft Auto, video games; Rock of Ages hit Broadway musical and feature film; the Oscar-Nominated film Boogie Nights, Friday the 13th, Teachers, Sixteen Candles, The Secret of My Success; JBL’s “Hear The Truth” brand campaign; and many more!
NIGHT RANGER is Jack Blades (bass, vocals), Kelly Keagy (drums, vocals), Brad Gillis (lead & rhythm guitars), Eric Levy (keyboards), and Keri Kelli (lead & rhythm guitars).
“Don’t Let Up” Track Listing:
1. Somehow Someway
2. Running Out Of Time
3. Truth
4. Day And Night*
5. Don’t Let Up
6. Won’t Be Your Fool Again
7. Say What You Want
8. We Can Work It Out
9. Comfort Me
10. Jamie
11. Nothing Left Of Yesterday
*Bonus audio track on Deluxe Edition
*Bonus DVD: Band Interviews; “Running Out Of Time” (video); “Day And Night” (Video)
For More Info Visit:
http://www.nightranger.com
https://www.facebook.com/nightranger