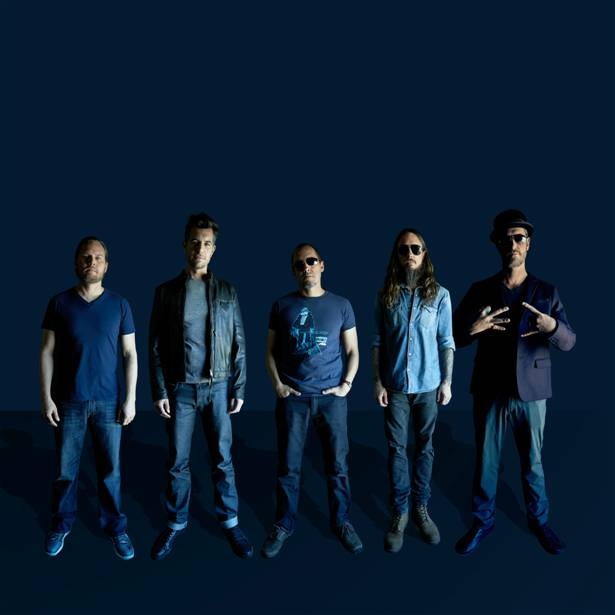 FIRST SINGLE
“TOO MUCH TO THINK”
SUMMER TOUR
GROUP ANNOUNCES 40-SHOW NORTH AMERICAN SUMMER 2017 TOUR
WITH TICKETS GOING ON SALE MARCH 18
311 are set to return with their 12th studio album titled MOSAIC, due out worldwide summer 2017 on BMG. The multi-platinum band’s first single “Too Much To Think” premiered at Alternative radio on Friday, March 10. Watch the lyric video for the song (here) and the group will launch a 40-show North American summer tour on June 22 in Cleveland. The new album MOSAIC is available to pre-order now at www.pledgemusic.com/ThreeEleven. Tour pre-sale tickets and VIP bundles start to go on sale March 14. Tour info at www.311.com/shows.
The 17-song MOSIAC was produced by John Feldmann (Blink-182, Panic! At The Disco, etc.) and Scotch Ralston (who produced 311’s iconic Transistor, Soundsystem and Stereolithicalbums). With MOSAIC, 311 are approaching their 10th consecutive Top 10 album debut on the Billboard Top 200 Albums Chart.
311 will hit the road summer 2017 for an eight-week headlining tour of North America. Marking the group’s 18th consecutive summer headlining the U.S, the outing features special guests New Politics plus The Skints / Passafire (on select shows). 311 will also make headline appearances at several festivals and radio events. *The full tour itinerary (June 22-Aug 20) is listed below and at: http://www.311.com/shows.
NICK HEXUM (singer/guitarist): “We wanted a title that pointed to our collective nature. Something that referred to the eclectic style of our music and the bond between the band members and our fans-and this title really captures that.”
CHAD SEXTON (drums): “We wanted to include our fans in the concept of this record. We have a very symbiotic relationship with our fans that see us year after year.  We wanted to find a word or phrase that would describe our fan base, our band and our music and to tie it all into a concept that could be presented in the album artwork as well.  Where we landed was perfect….MOSAIC.  As one definition states:  “a combination of diverse elements forming a more or less coherent whole.” We feel this word can accurately describe our band, music and our fan base together. For us, it’s still a celebration. For the simple fact that if people have different sets of ideas and opinions, likes and dislikes, and are able to get along and come together over the one bond they share (music) – there is no satisfaction like the joy experienced when this happens. It’s a celebration over the triumph of our differences and it’s the main concept we’ve been presenting throughout our entire 27 year journey-UNITY.”
NICK HEXUM: “A menagerie of styles created by five friends and our extended musical family at our best!  Innovation, fun, chops, and heart.”
P-NUT (bass), adds “Fresh, Hard and Satisfying… Future-rock at our best… We’ll always be forward-thinking and flipping the script on ourselves.”
HEXUM continues, “The key word for this set of tunes is innovation.  We went in some new directions, which will surprise people.  Music is a never-ending journey.  I’m always proud of how diverse the styles are that we include in our music.  MOSAIC is our most adventurous collection yet. Some of our highest energy jams ever.  Funky grooves, dub riddims, party anthems, heartfelt sincerity, it’s all in there. I think the dynamics are the newest feature.  Having builds inspired by very modern music raises the intensity to new heights.”
NICK HEXUM: “The MOSAIC cover captures the spirit of the collective nature that is 311-band & fans together to form something greater than the sum of its parts.”
CHAD SEXTON: “We know the trend these days is to release shorter albums or even just singles-but this album is dedicated to our longtime fans and we wanted to give them everything.  The album is 17 songs that we’re really proud of-and that really capture the musical range of 311. While we’ve been mixing the album there have been several moments that reminded me of Transistor (311’s seminal 4th album).  MOSAIC definitely takes some steps forward into more modern territory, but there are distinct reminders of where we come from in the songs.Something about blending an older 311 style with a newer 311 style is really exciting to us and I think it will be for the fans too.”
Catch 311 on tour this summer in the following cities:
311
2017 SUMMER TOUR DATES:

Get “Too Much To Think” now: http://smarturl.it/TMTTAR.
www.311.com
https://www.facebook.com/official311
https://twitter.com/311?lang=en
https://www.instagram.com/311/?hl=en
PledgeMusic.com pre-orders for MOSAIC include codes for first access to summer tour pre-sale tickets & VIP packages. Plus prize giveaways and access to behind-the-scenes news, photos and videos of the making of the album. The album Pre-Order offers Digital, CD, Vinyl & Autographed bundles.
About 311:
Over the course of their amazing career, 311 has sold over 9 million albums/DVD’s in the U.S. alone. 311’s last 9 consecutive albums reached the Top 10 on the Billboard Top 200 Album Charts and they’ve had 9 Top 10 radio hits, including three No. 1’s. Their list of hits includes “Down,” “All Mixed Up,” “Amber,” “Love Song,” “Come Original,” “Beautiful Disaster,” “Don’t Tread On Me,” “Hey You,” and “Sunset In July.” 311’s last album “Stereolithic” debuted at #6 and their new album MOSAIC will be released summer 2017 via BMG and was produced by John Feldmann (Blink 182, Panic! at the Disco, The Used, etc.) and Scotch Ralston (who produced 311’s Transistor, Soundsystem & Stereolithic albums). 311’s celebratory live shows & incessant touring schedule have earned them a massive grassroots following nationwide. 311’s annual summer headlining run the Unity Tour has become one of the most anticipated concerts of the summer. 311 have headlined this U.S. summer tour for the past 18 consecutive years. Previous 311 Unity Tours have included Sublime with Rome, The Offspring, Snoop Dogg, Slightly Stoopid, Cypress Hill, The Roots, Matisyahu, Ziggy Marley, and more. 311 just returned from their 5th sold-out 311 Caribbean Cruise. The 311 Caribbean Cruise has sailed on 5 adventures to date: Cozumel (2017), Jamaica (2015), Bahamas (2013 & 2012) & Turks & Caicos (2011). The 4 night adventure aboard a luxury Norwegian Cruise Lines ship sees some 3,000 passionate 311 fans (from all 50 U.S. states & 15 countries), with 311 playing 3 shows along the way. In 2016, the group launched 311 Amber Ale in conjunction with Rock Brothers Brewing, Cigar City Brewing & Nebraska Brewing. 311 also launched their Grassroots Uplifter brand vape pen. 311 was formed in 1990 in Omaha, Nebraska by singer/guitarist NICK HEXUM, singer S.A. MARTINEZ, guitarist TIM MAHONEY, drummer CHAD SEXTON and bassist P-NUT. The band now resides in Southern California. For more info: www.311.com.