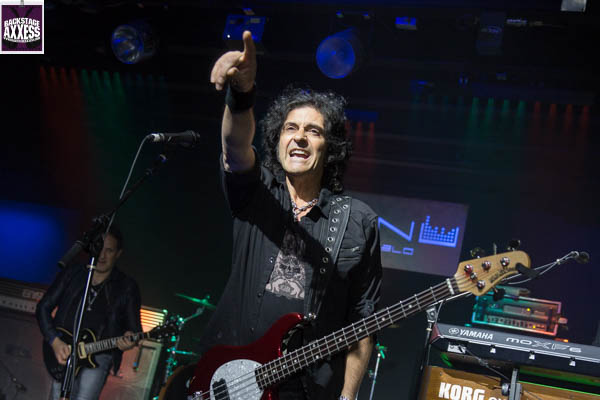 Fans of the late, great Ronnie James Dio and some of his original bandmates united in Buffalo, New York, last night when Last In Line took over The Venu Night Club.

Last In Line, taking its name from Dio’s second album, includes former members of the original lineup of Dio.  Guitarist Vivian Campbell and drummer Vinny Appice were joined by bassist Phil Soussan, keyboard player Erik Norlander and singer Andrew Freeman.  The band took the stage shortly before 10:30 PM and packed a wallop of Dio tunes and some new material into nearly 70 minutes of pure power.

The Venu offered up an intimate setting with about 400 fist pumping fans proudly displaying the maloik (sign of the horns) in Dio’s honor.  In a tribute that I believe would make Ronnie proud, this band was on fire.  “Stand Up and Shout” opened the show and Vivian Campbell was amazing with soaring riffs all night long.  While I’m a fan of Def Leppard, Campbell is unleashed with this lineup and you can always count on Vinny Appice to provide a stellar performance behind the kit.  After “Don’t Talk to Strangers,” fans chanted “Vinny, Vinny, Vinny” and he made it a point to say “thank you” to the crowd.   Another bonus was a mini drum solo after “Last In Line.”

A few of the band’s original tunes were sprinkled in and well received.  “Devil In Me” and “Martyr” have hard driving beats and fit right in with the classics.  While Freeman doesn’t sound like Dio, he too has a very powerful voice and is definitely a good fit with this band.  The highlight for me was watching Campbell’s fret board mayhem during the old school anthem “Holy Diver.”  The set closed with “Rainbow in the Dark” and Freeman quipped that instead of leaving the stage and coming back, everyone should just close their eyes for a moment.  With that, the “encore” began with Soussan paying homage to late Jimmy Bain as he introduced “Starmaker.”

The final song of the night was the befitting “We Rock” and Last In Line certainly does.  This is truly a must see show if it comes your way.  These are remarkable musicians and their performance was flawless, leaving me wanting more.

Stand Up and Shout (Dio cover)

Straight Through the Heart (Dio cover)

Rainbow in the Dark (Dio cover)

We would like to thank Ross cat from Back 2 Back entertainment for the credentials to review the show.