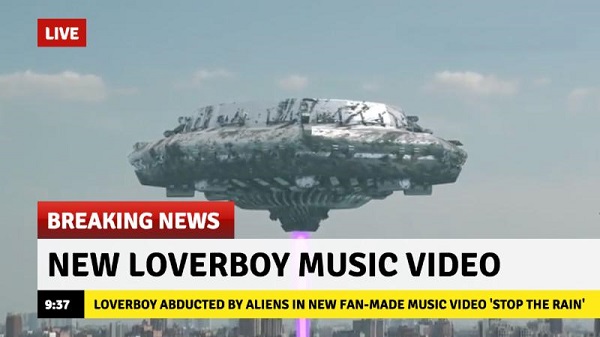 LOVERBOY ABDUCTED BY ALIENS
IN OFFICIAL FAN-MADE MUSIC VIDEO FOR NEW SINGLE, ‘STOP THE RAIN’
Los Angeles, CA. — March 13, 2017
When LOVERBOY fan David Napolillo first heard the band’s new single, “Stop the Rain,” and decided to enter the contest to make the best official video for the song, he interpreted the title in a very unique way.
“I knew the most obvious theme would be lots of rain, but I didn’t want to do what other entries might do,” he explained. “So, instead of using the literal image of rain, I had aliens ‘raining down’ on Earth in search of this awesome band they recently discovered.”

That unusual approach was enough to make his video the winning entry in the contest on LOVERBOY’s website, with the auteur receiving a black Fender Squire guitar autographed by the entire band. His clip is now the official music video for the single, which can be downloaded for free on the LOVERBOY site (www.loverboyband.com), and is available for streaming on Spotify, Apple Music, Tidal, Tunecore and Deezer, among others. The new official fan-made video for “Stop the Rain” can be seen HERE