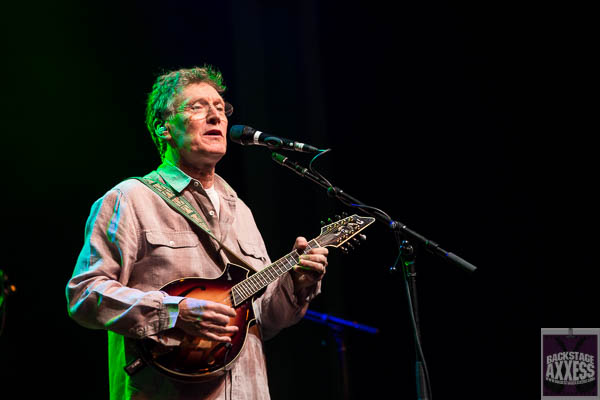 The year is 1966 and the slow click of the eight-track sliding into every home and car stereo can be heard as the prelude to the hit single “I’m a Man” by the Spencer Davis Group.  The irony of it is the high-tenor voice behind the soulful R & B classic is a blued eyed English lad, a then sixteen-year old boy, affectionately known as Stevie Winwood. That would mark the beginning of what was and still is the storied half-century career of the iconic Rock & Roll Hall of Famer.

Fast forward 50 plus years and Winwood is still out on the road, doing what he does best. It’s been a few years since Winwood played the Western New York area and I, for one, was excited for his return.

The Living Legend opened the evening with his 1986 Grammy winning “Record of the Year” title track “Back In the High Life,” stepping onto the front of the stripped down stage with a seductive electric mandolin overture. With such a vast catalog to chose from, Winwood tactfully crafted his thirteen song set to showcase his multi-faceted musicianship which included a world-class backing band.

Settling in behind his Hammond B-3, the maestro seamlessly navigated through the selection of songs and instrumental changes brandishing his majestic musical skills.  Winwood used Traffic staples “Low Spark of High Heeled Boys” and “Empty Pages” along with Blind Faith’s yearning “Can’t Find My Way Home” to impress the showroom with electrifying Fender riffs.  But it was during the encore performance of “Dear Mr. Fantasy” that Winwood’s spine-tingling solo brought the house down.

Winwood closed out the celebration of songs with an uplifting sing along with the delighted crowd to the Spencer Davis hit “Gimme Some Lovin.”

In a rare but most pleasant surprise for a casino show, there was an opening act by the name of Miss Lilly Winwood. The daughter of the Music Icon performed a stirring thirty minute acoustic set of original material showing she truly has inherited her Dad’s songwriting gift.

Performing songs from her debut EP titled “Silver Stage,” the lovely young songstress showed a sense of humor telling the appreciative crowd she was enjoying her support slot on the tour “opening for an old friend tonight.”  She would later join her Father during his biggest solo hit “Higher Love” and once again during the evening’s finale “Gimmie Some Lovin,” where it all began for her Dad.

Photos by Joe Saccomanno. We would like to thank Phil Pantano for the credentials to review the show.