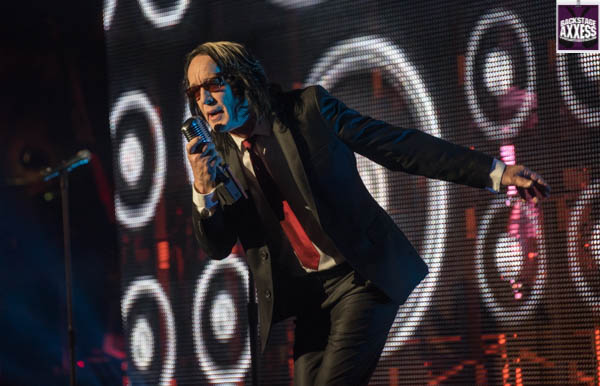 Midway through Saturday’s performance in Kingston, New York, Todd Rundgren mentioned to the crowd he had become a doctor earlier in the day.  He was, in fact,  given an honorary doctorate from the Berklee School of Music that afternoon and delivered the school’s commencement address.  Rundgren cited the decision to make “A Wizard a True Star” after the hugely successful “Something/Anything?” as the pivotal point in his career.  “Wizard” has subsequently been cited as an influential work by many contemporary artists, and amongst the Rundgren Nation, it is considered Rundgren’s career defining work.  Fast forward to 2017 and we find Todd Rundgren flanked by two young dancing girls in front of two layers of state-of-the art video screens, one sandwiches a powerful band, and Rundgren is out promoting a new album. In short, more than four decades after Todd gave the world “A Wizard a True Star” he still chooses to challenge himself and his fans, new and old alike. The Chivalrock Tour, in honor of his newest release “White Knight,” is the reconciliation of what Todd has been doing since the end of his tenure as a Bearsville recording artist.

The show presents three sides of the musician, starting with the modern EDM infused Todd, followed by guitar hero Todd and finishing with the Philly soul funky Todd who can make you want to dance.  It
isn’t until the encores that Todd performs a single song from his Bearsville years, and even those three oldies are polished up. Kingston is a stone’s throw away from where Rundgren recorded his
Bearsville catalogue.  In essence, this was a fascinating homecoming for the artist who has always refused to stand still.  In addition to being a visually breathtaking and bombastic, musically it may be the
most cohesive presentation of Rundgren’s latter catalogue that combines all the great elements of the last three solo tours, including band members. While some fans have had a hard time accepting the band behind a semi-transparent video wall, the band’s playing has not suffered at all.  Prairie Prince and Kasim Sulton have become one of the best powerhouse rhythm sections around, Jesse Gress is playing with incredible conviction and Greg Hawkes brings it all together with his versatility and pop sensibility.  What makes a live show great is the artists ability to take a studio recording to the next level, and Rundgren’s band has done that incredibly well, especially on the songs from the last three studio albums.  For those who might be scared off by the notion that Todd is not playing the older material on this tour, the way the show is structured you manage to get all the elements of those great songs in an updated
form. So while there is no “Bang the Drum” you get the party anthems “Evrybody” and “Party Liquor,” and instead of “Love in Action” you get songs like “This is Not a Drill” or “Strike” and even without “I
Saw the Light” there is the delightful new pop gem “Who Wants to Do This,” and while “Love is the Answer” is absent “Past” is an equally moving song.

Perhaps most important is that Todd not only is winning over his audience, he seems to be having a great time.  The show is well crafted and the “Global” girls from the tour of the same name bring
not only added strength to the backing vocals, they infuse a youthful energy into the show.  If you plan on taking a date and talking through a “White Knight” show you should probably stay home, but if you want to relive some great moments from Todd’s career in a new package then you will be fully entertained and satisfied, which is just what the Dr. Rundgren ordered.

This is Not a Drill

The Beginning of the End

Photos by Gus Griesinger. We would like to thank both Paul Maloney from Panacea Entertainment and Mary Lou Arnold for the credentials to review the show.