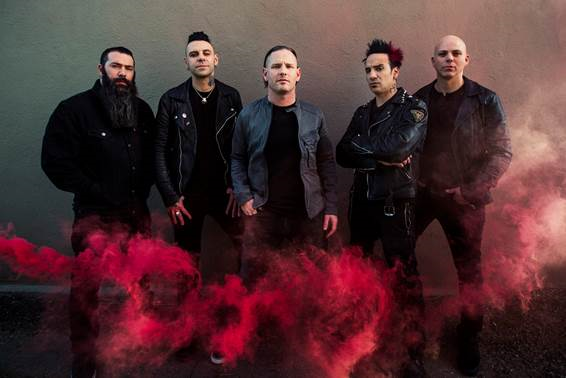 Recorded at Sphere Studios in North Hollywood, CA with producer Jay Ruston, HYDROGRAD features the lead tracks “Song #3” and “Fabuless” which are available now at all DSPs and streaming services.  “Song #3” has quickly staked its claim in the Top 5 at Active Rock Radio and has been the greatest gainer on the chart for four consecutive weeks. Additionally, the Ryan Valdez directed music video for “Song #3” has received over 1 million views in just a weeks’ time, while the track has been streamed nearly 2 million times on Spotify alone.  “Fabuless” is joined by an official music video, directed by Paul Brown, which has amassed over 3 Million views on Stone Sour’s official YouTube channel.

HYDROGRAD is available for pre-order at all DSPs and via www.stonesour.com, with all pre-orders accompanied by instant grat downloads of “Fabuless,” “Song #3” and “Taipei Person/Allah Tea” (see tracklisting / album art attached). Exclusive pre-order merch bundles are also available at www.stonesour.com.

Next month Stone Sour will celebrate HYDROGRAD with an epic summer trek alongside fellow Roadrunner recording group Korn. “The Serenity of Summer Tour” gets underway June 16th at Salt Lake City, UT’s USANA Amphitheatre and then travels through early August (see tour itinerary attached). Presented by Live Nation, support throughout the eclectic tour comes from Babymetal, Skillet, Yelawolf, Islander and Ded.  Furthermore, Stone Sour has several festival appearances slated for this summer including Rock Fest (7/14), Rock USA (7/15), Chicago Open Air (7/16) and more. This fall Stone Sour will head overseas for an international leg of their ‘Hydrograd World Tour’ which will kick off November 10th with a performance at Moscow, Russia’s Stadium. For complete details and ticket availability, please visit www.stonesour.com.

Stone Sour unleashed their eponymous debut album in 2002 and was immediately confirmed as one of the most significant hard rock outfits of the 21st century. The self-titled release earned RIAA gold certification while singles “Get Inside” and “Inhale” each received GRAMMY® Award nominations for “Best Metal Performance.”

COME WHAT(EVER) MAY followed in 2006 and proved an even greater accomplishment with a top 5 debut on the SoundScan/Billboard 200 and a #1 entry onto Billboard‘s “Rock Albums” chart. The acclaimed album spawned still another GRAMMY®-nominated single in “30/30-150” on its own way to RIAA gold certification.  COME WHAT(EVER) MAY unleashed a series of rock radio classics, including “Sillyworld,” “Made of Scars,” the #1 hit, “Through Glass,” which spent seven weeks atop Billboard‘s “Hot Mainstream Rock Tracks” while also reaching #2 on “Alternative Songs” and the top 40 on the overall “Hot 100.” The song’s companion video was also a favorite, now with over 48 million individual views at YouTube alone.

Stone Sour’s most recent all-original releases, the monumental HOUSE OF GOLD & BONES – PART 1 and HOUSE OF GOLD & BONES – PART 2, both made top 10 debuts on the SoundScan/Billboard 200 just six months apart from one another – the band’s third and fourth consecutive top 10 chart entries. The two-part concept album yielded a string of multi-format rock radio hits, including the top 5 favorites “Absolute Zero,” “Do Me A Favor,” and “Tired,” the latter of which ascended to #1 at Mainstream Rock outlets nationwide.

HOUSE OF GOLD & BONES drew widespread critical applause with ArtistDirect hailing “PART 1” as “a milestone for Stone Sour and for modern rock music. It’s on par with Alice In Chains’ ‘DIRT,’ Metallica’s MASTER OF PUPPETS, Queens of the Stone Age’s SONGS FOR THE DEAF, Soundgarden’s SUPERUNKNOWN, and any other game-changing albums you can think of.” HOUSE OF GOLD & BONES – PART 2 earned equally great acclaim, including placement on Revolver‘s “Top 20 Albums of 2013” and Loudwire‘s “Top 10 Rock + Metal Albums of 2013” ranking. The Guardian, in its four-out-of-five starred rave, praised Stone Sour frontman Corey Taylor’s “remarkable transformation into heavy music’s premier polymath and renaissance man” while further hailing the album’s “towering melodies and moments of radio-friendly majesty, the band’s trademark straddling of the divide between metal and commercial rock sounding increasingly adroit.”

2015 saw the arrival of STRAIGHT OUTTA BURBANK, an unprecedented EP in which Stone Sour take on five immortal songs originally performed by such iconic artists as Bad Brains, Iron Maiden, The Rolling Stones, Mötley Crüe, and Slayer. The EP is highlighted by a stunning rendition of The Rolling Stones’ “Gimme Shelter” featuring distinctive guest vocals from Lzzy Hale of Atlantic recording group Halestorm, STRAIGHT OUTTA BURBANK is available now at all DSPs and streaming services.

Known far and wide as a truly incendiary live act, Stone Sour has built an international fan following through countless headline tours, multi-artist caravans, and performances at such famed festivals as Rock In Rio and the UK’s Download Festival.