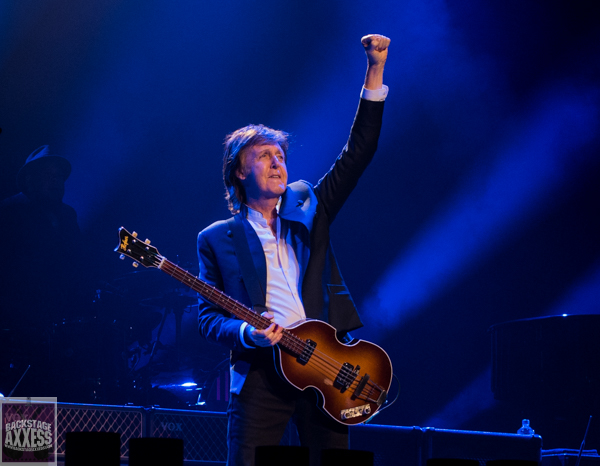 As per Live for Live Music:

This year has been a big one for Sir Paul McCartney. On June 18th, the former member of The Beatles turned 75. A few days prior to his birthday, McCartney’s rank for knighthood was elevated after twenty years to Companion of Honour for his services to music. Over the weekend, McCartney had yet another success to celebrate — after a long battle dating back decades, the prolific songwriter finally regained the copyright to the Beatles catalog in a private settlement with Sony ATV.

In 1969, McCartney and Lennon attempted to buy Northern Songs, which was the original publisher of the Beatles catalog, though the duo lost out to ATV Music. Some decade-and-a-half later, ATV Music went up for sale, offering McCartney yet another chance to resecure the rights to the Beatles’ Lennon-McCartney songs. In an unfortunate twist, McCartney was outbid by friend and fellow musical legend Michael Jackson, who bought the company for $47.5 million in 1985 — Jackson bought ATV Music following McCartney’s advice noting the value of music publishing, and their friendship never recovered from what McCartney considered a betrayal. In early 2016, Sony announced that it would buy out Jackson’s 50% stake of ATV Music from the late musician’s estate for $750 million, creating yet another chance for McCartney to negotiate the rights to his songwriting work with The Beatles.

The U.S. Copyright Act of 1967 was passed as a means to let songwriters regain the rights to their songs — the law states that for songs published before 1978, rights can be reverted back to the original author after 56 years (or for songs published in or after 1978, the song’s rights can be recaptured after 35 years). In 2015, McCartney began the process of reclaiming the rights to some of his music under the act, filing to reclaim the rights to 32 songs, as a number of titles from the highly coveted Lennon-McCartney catalog are on the eve of hitting the 56-year mark, with the first Beatles single, “Love Me Do,” coming up on its 56th anniversary after being released in 1962. While this process was underway, a British court ruled that the U.S. Copyright Act did not apply in Great Britain, making it significantly harder for McCartney to legally secure the rights to his music globally.

Thus, the news over the weekend that Paul McCartney secured the rights to his music in a private settlement was a big win for the former Beatle, who has been on this journey to secure the rights to his own music for nearly fifty years. While few details about the settlement have been disclosed, McCartney’s lawyer, Michael Jacobs, announced, that Sony and McCartney “have resolved this matter by entering into a confidential settlement agreement” at the end of last week and that McCartney’s lawsuit over the catalog had been dismissed. Congratulations to Sir Paul McCartney for this big win over the weekend!