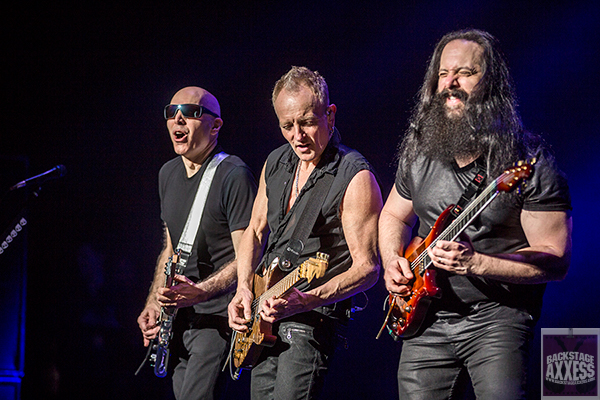 Since its inception, the G3 Tour has thrilled guitar aficionados and casual fans. The list of guitar Gods that Joe Satriani has managed to pull together is incredibly impressive to say the least, and the tour’s latest incarnation only adds to the storied history of the tour. The tour stopped in Rochester NY for one of the final dates of their 2018 North American trek. The venue was the Rochester Auditorium Theatre, a storied concert hall that once hosted Buddy Holly.

The evening started with the longest tenured Def Leppard guitarist in Phil Collen. He is a guy who has existed in the shadows of a major arena rock act for decades. Collen culled his set from his critically acclaimed Delta Deep project, including vocals by Debbi Blackwell-Cook, whose appearances during Collen’s set and during the encores was a tremendous addition to the evening’s repertoire. In a stripped-down setting, one can appreciate Collen’s guitar prowess, but the best part of Collen’s set is seeing his subtle stylings on display without all the surrounding bombast. Collen is the consummate stage professional, and in the smaller setting he was also able to connect with fans on a level that no major arena rock act can. In short, he and his band set the evening in motion perfectly.

John Petrucci performed second, and his enthusiasm is infectious. While most of Petrucci’s work is dark and foreboding, he did include a delightful and frolicking version of “The Happy Song.” Petrucci’s fret wizardry is always a treat to watch, he makes it all look so easy. Despite the fact there was a triple bill, there was little time wasted changing out sets. Each artist were able to have their stage set, which really made the show feel really big, as it should.

Joe Satriani’s set is almost indescribable in its perfection. His solo shows run long, so it may be the fact that his show was slightly truncated that made it so powerful. Everyone knows Joe surrounds himself with prolific musicians, and he is an amazing guitar player to watch, but whoever designed his light show deserves an award, it was a work of perfection. The lights were perfectly timed and added to a great set of music. I wish every light show was as well thought out. Satriani included his signature songs “Satch Boogie and “Summer Song” along with  4 new tracks off of his recent release “What Happens Next” disc.

As far as the final jam, which many fans consider the pièce de ré·sis·tance, did not disappoint at all. On their coverversion of Deep Purple’s “Highway Star,” the guitar gods had a solid framework for each guitarist to display their prowess and ability to combine their diverse playing styles. It was loud, just as any live Deep Purple song should be. The next cover was of Stevie Wonder’s “Superstition,” and the group’s take was unique. It was an interesting hybrid between the original and Stevie Ray Vaughn’s cover version. The full band really stretched out on the song. The evening ended with the blues masterpiece “Going Down.” It’s a song that has appeared on the tour before with different players.

The interplay between the guitarists was a joy to watch. The show took place on a Tuesday, which may have impacted attendance. It does not matter to any of the players whether the house is full or not, they put on a clinic on what a great guitar-driven show should look like. It’s a show that should be on your bucket list no matter which 3 you get with G3.

Down in teh Delta (Delta Deep song)

Wrath of the Amazons

Thunder High on the Mountain

Photos by Dave Jones. We would like to thank Melissa Dragich Cordero and Michelle Gutenstein from Mad Ink PR for the credentials to review the show.