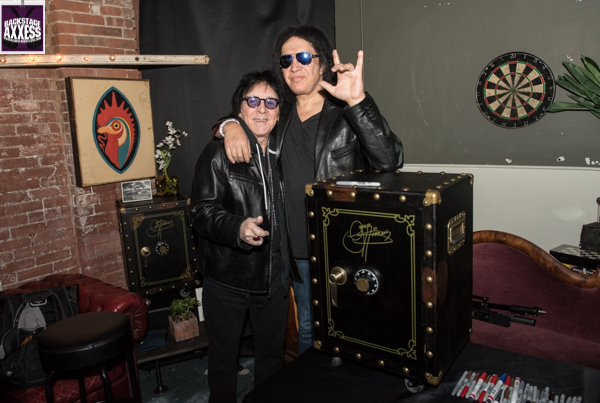 Gene Simmons is known for doing big things. His band KISS has been giving over the top stage shows since the band formed back in 1973. So when Simmons decided to put together the ultimate box set, of course it had to be the biggest one ever released. In conjunction with Rhino Media, Simmons has put together a 17” x 25” 38-pound Vault that will wet every Simmons or KISS fans appetite far and wide. This vault includes 150 recordings from over the last 50 years of Simmons’ recording career. It also includes  a new Gene action figure, an “In Gene We Trust” oversized commemorative coin, a deluxe book containing over 50,000 words and 160-pages of unseen photos from Simmons’ personal collection. There are also hand picked special gifts from Simmons’ archive. He is currently going all over the world to select cities to hand deliver this vault package. March 23 & 24th  Simmons showed up at the VK Nagrani mens clothing store to do a storytelling session and then hand out the Vaults to the 100 or so fans who were in attendance. This experience also included plenty of food and various drink which included the Gene Simmons MoneyBag Soda brand. Paul, John and Janine Janik from Gene Simmons MoneyBag Soda brand were there handing out the tasty sodas to the fans.

A very special guest stopped by to say hello to Gene. None other than original drummer Peter Criss stopped by to say hello to Gene and thank the fans for coming to support Gene on his Vault tour. Criss and Simmons went in the back as Simmons presented Criss with his own Vault and they posed for a few photos. The media were then asked to give both some time as they caught up alone for about 10 minutes before Criss then exited so the fans can continue on with their Vault experience,

All the fans were happy with the Vaults and the experience that both Simmons and the venue VK Nagrani provided. To be a part of the Vault Experience, please go here: The Vault to see where he will be heading off to next.

We would like to thank Farida Waquar from Wills PR for the credentials to attend the event.