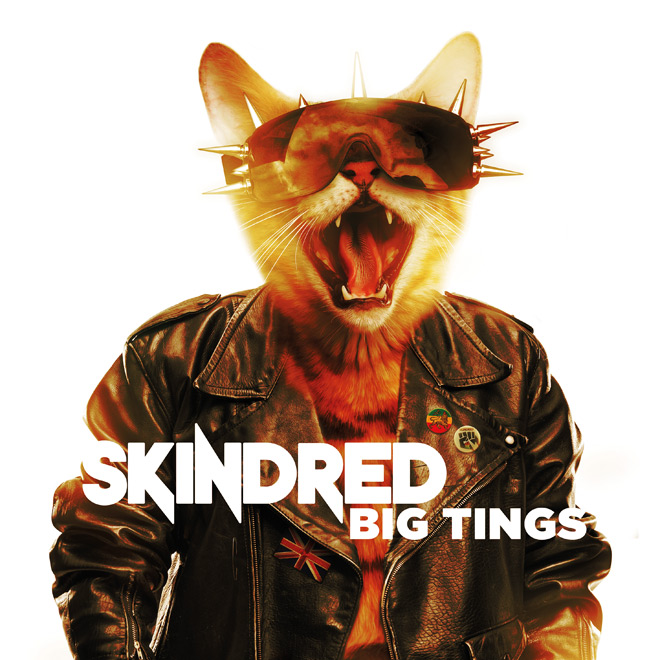 Welsh rockers Skindred have recently released their seventh studio album and follow up to 2015’s “Volume” album entitled “Big Tings.”  The band, led by vocalist and rapper Benji Webbe , is known for their unique blend of heavy metal and reggae, a genre that has  been dubbed “Ragga Metal.”

The new record takes the band in a slightly different direction with a lot less emphasis on crunching metal guitars instead going very heavy on the bass and incorporating a very danceable almost EDM vibe.  Skindred has always been very adept at blending different genres into a cohesive whole and “Big Tings” really takes it to the next level.  The title track kicks things off with a very dance party groove to it and a fun sing along chorus.  “That’s My Jam” adds a lot of electronic elements to the mix including some heavy breathing with the first of Webbe’s outstanding rap breakdowns.  The first single “Machine” is a true rocker with vocals by Reef frontman Gary Stringer and guitars by Phil Campbell of Motorhead.  The song is both catchy and heavy and was used by AC/DC’s Brian Johnson as the intro to his TV show “Cars That Rock.”  Another crazy rap breakdown is featured on “Last Chance” before the laid back reggae feel of “Tell Me” gives you a real sense of being on an island vacation.  The anthemic rocker “Loud and Clear” is not to be missed and “Alive” is a jubilant celebration of life.  The heavy bass kicks in again on the funky rhythms of “Broken Glass” and Webbe gives an tremendous performance on the poignant ballad “Saying It Now” with an absolutely huge vocal.

“Big Tings” is proof that Skindred isn’t afraid to experiment with new sounds and step out of their comfort zone.  With ten solid new tunes,  this record may be what finally skyrockets Skindred to the top.