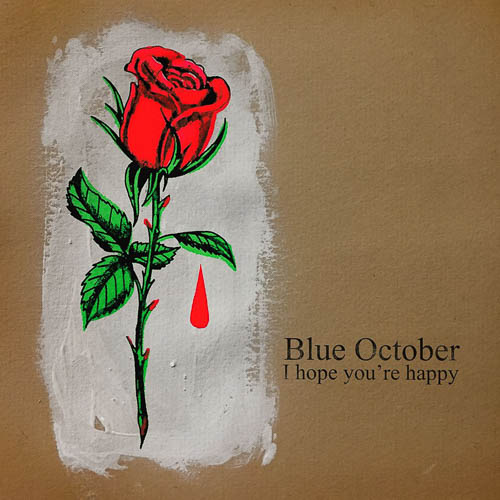 Alternative rockers Blue October made a name for themselves writing songs full of passion and angst accompanied by emotional  performances from lead vocalist Justin Furstenfeld and violinist Ryan Delahoussaye.  Justin has struggled with mental illness over the years and his art has been a reflection of his struggles, taking fans on a roller-coaster ride of emotions with songs like “Razorblade,” “Dirt Room,” and the self-loathing in one of their biggest hits “Hate Me.” The band has recently released their ninth studio album “I Hope You’re Happy,” a collection of twelve hauntingly beautiful new songs.

The new record really shows the growth of the band not only musically but also personally as it becomes clear early on in the album that principal songwriter Furstenfeld is in a much better place in his life.  The finely honed songs are full of passion and soul with a much more positive message to be heard.  As a whole, the record is pop rock perfection with a laidback vibe.  “Your Love Is Like a Car Crash” is a soulful ballad that oozes romance while “I’ll Do Me, You Do You” sends a message of acceptance. Justin’s vocals are in top form from the plaintive pleas of “How To Dance In Time” to the fierceness of “Colors Collide.”  The title track is a fun upbeat, 80’s style pop single which will have your toes tapping in no time.  Violinist and keyboardist Ryan Delahoussaye has the ability to add in unique twists and turns to the lush, sonic landscape of the songs which are driven by the rhythm section of drummer Jeremy Furstenfeld and bassist Matt Noveskey.  Other standout performances are the elegant piano instrumental “Remission in CmaJ” and the epcic album closer “Further Dive (The House That Dylan Built)” which clocks in at just over nine minutes and has a violin solo midway that shows exactly what Delahoussaye is capable of.

Blue October has always been a band that feeds on emotions and their unique ability  to connect with their fan base.  “I Hope You’re Happy” continues that trend but this time focuses  on a much, more positive feeling as the band enters a new chapter of their career.