Country music is traditionally a genre built on the same core values of human decency that most try to abide by in their daily lives. The fans of country music are hard working and tend to be pretty wild as well. Country music says it’s okay to party heavy just as long as you get your work done, and one could argue this runs counter-intuitive to a midweek country show. Cadillac Three and Black Stone Cherry  have built a loyal following for their gritty and hard rocking country sound. As the crowd filed in, there were lots of jeans and plaid shirted fans along with some urban cowboys in leather and studs.

Everyone was ready for a evening of country rock and beer. With cups in hand, the fans pushed to the front of the stage as Black Stone Cherry took the stage first. They quickly set the tone for the evening with “Blame It On The Boom Boom,” which is a rough and tumble, bluesy tune about how much a boy loves his girl. They followed with “White Trash Millionaire” and the crowd got into it and sang along and danced as if nobody was watching. As their set played out, it was evident these boys were party people. The beer was flowing and the music was rockin’ and the boys were yellin’ and the girls were shakin’ and well….you get the picture.

Headliners Cadillac Three continued the party and brought even more craziness with them. Led by lead guitarist Jaren Johnson, they brought their small town Kentucky roots to the stage with a fierce power. This is no pop country band. Their rock and roll roots are bared for all the see and feel. “Cadillacin” off their 2017 album “Legacy” broke the ice as the crowd followed Johnson’s every word, singing loudly. Following with tunes like “Long Hair Don’t Care,” “American Slang” and “The South” the crowd got louder and the band responded by turning their amps up even higher.

Showing a great deal of respect for the men onstage, even during lesser known cuts, the crowd was at the edge of craziness but never out of hand. The band responded by giving them everything they demanded and more. It was a great matchup, a band that was happy to play for a loving crowd, and a crowd that loved everything the band did.

Bury Me in My Boots

Take Me To The Bottom

Blame it on the Boom Boom 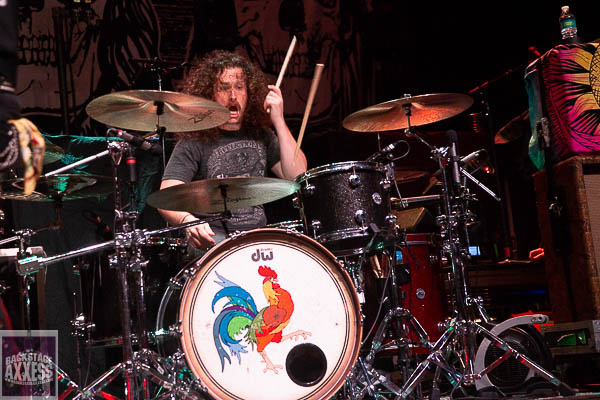 We would like to thank Chris Provost from Triple 8 Management for the credentials to review the show.