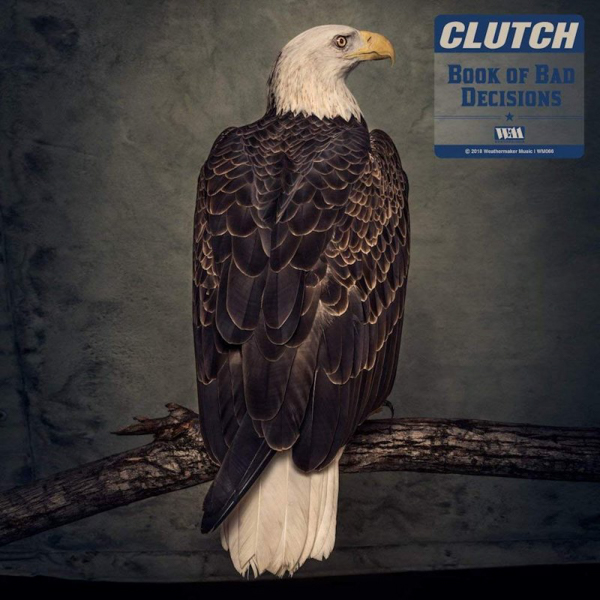 Legendary Maryland rockers Clutch have just released their twelfth studio album “Book of Bad Decisions” via their own label Weathermaker Music.  A rarity in today’s age, Clutch still boasts their four original members and to say that they perform like a well oiled machine is an understatement.  These guys have been playing together since high school and can probably read each other’s minds by now as well as  anticipate all the nuances of their musical performances.

The new album contains a lot of firsts for Clutch.  This time out each member of the band contributed riffs for the album and the band chose to work with four time Grammy award winning producer Vance Powell who has worked with the likes of Chris Stapleton and Jack White.  Recording with old school gear, Powell helped the band achieve a very raw, organic sound that is unmistakably and quintessentially Clutch.  Led by the unique vocal stylings of frontman Neil Fallon,  the record is groove heavy with funky bass lines from Dan Maines and distinctive rhythms from drummer Jean-Paul Gaster.  Guitarist Tim Sult is on fire providing crunching leads and fiery riffs with all the passion and power of Clutch’s earlier work.  Fallon not only possesses a voice made for rock but he is the epitome of cool as he asks “Are you cool? Well, I’m cool” in “How To Shake Hands.”  Lyrically, Fallon takes us to the church of rock with “Sonic Counselor,” a tune honoring Clutch fans, or Gearheads as they are often called and takes us back to hearing Black Sabbath for the first time in “A Good Fire.”  “Hot Bottom Feeder” has a real blues, almost southern rock vibe while “In Walks Barbarella” contains another Clutch first, a funky horn section that provides the perfect, offbeat addition to the song.    Closing things out is the slower pace of “Lorelei” with a huge, powerful chorus.

Over the years Clutch has developed a sound that is often imitated but never, ever duplicated with their own brand of “weaponized funk.”  Twelve albums in, they’re putting out some of their best material to date with “Book of Bad Decisions,” another powerhouse of a record to add to their arsenal.