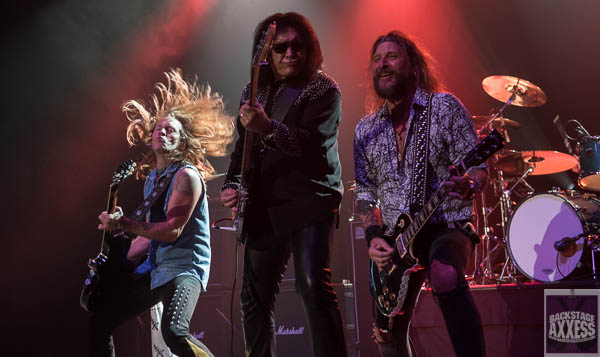 As KISS is gearing up to announce the dates for its “End of the Road” final tour, original member and founder Gene Simmons has some of his own unfinished business to do. Outside of a KISS appearance on Americas Got Talent, Simmons spent majority of a week and a half in New York state (especially Western New York) promoting his Gene Simmons Moneybag Soda. He made appearances in Niagara Falls, Rochester and Fayetteville (outside of Syracuse) meeting fans and doing interviews regarding the cola.  In the meantime, his solo band had one date left at the Turning Stone Casino this past Friday night.

Simmons’ band consists of Ryan Spencer Cook, Jeremy Asbrock and Philip Shouse all on guitar and Christopher Williams on drums. The band has been consistent minus Williams who took over for Brent Fitz (who went back to Slash with Myles Kennedy & The Conspirators) a few months ago.  This band has played all over the world for the last year and half and Syracuse was the designated city that they would be wrapping it all up for the foreseeable future.

They kicked off the KISS staple “Deuce.”  Simmons does have lots of perspiration and his trusty towel wasn’t on the microphone stand for him to use. He asked for some refuge from anyone on the stage or in the crowd and a woman obliged by going on stage and taking her bra off. Simmons treated the bra like any standard face towel and used it dry off the entire show.  A funny moment and these types of actions with the ladies that Simmons has always been known for.

The major difference that stands out between a KISS show and Gene Simmons Band show is the setlist. Simmons digs deep and gives the most passionate and rabid KISS fans what they want. Playing songs like “Charisma” “I” and “Love Theme From KISS” were worth the price of admission alone.  The band sounded very tight and worked around letting Simmons be up front & center. There were few words said in between songs as the band focused on the music.  One thing that Simmons has been doing to get closer to the audience is to invite them up to take part in certain songs. For “Do You Love Me” he invited up ladies to take part in singing the song with him. For “I Love it Loud,” it was the guys. It as a combination of both gals and guys for the last song “Rock and Roll All Nite.” It really gave the fans a unique experience that they would never be able to with any of their favorite artists. Before “Rock and Roll All Nite,” Simmons gave away all of his cookies, muffins, milky way’s or sweets that were left over from catering. He handed them out, tossed them out and let fans grab what they wanted. He also called up his partners in the Gene Simmons Moneybag Soda in Paul & John Janik to hand out colas to some lucky fans in the front.  Halloween came early for the fans in attendance who were able to grab any one of those tasty treats.

In wrapping up, this was the most fun show I witnessed this year. I loved the fact that Simmons has enough trust to invite the fans up onstage to participate not only once, but three times. He also sounded like he always has and his playing has always been underrated. It was truly a show that I would like to see again. So when KISS does decide to call it a day, the hope is that Simmons can resurrect this band for future dates.

Shout it Out Loud (KISS song)

Do You Love Me (KISS song)

I Love it Loud (KISS song)

We would like to thank Ryan Cook for the credentials to review the show.