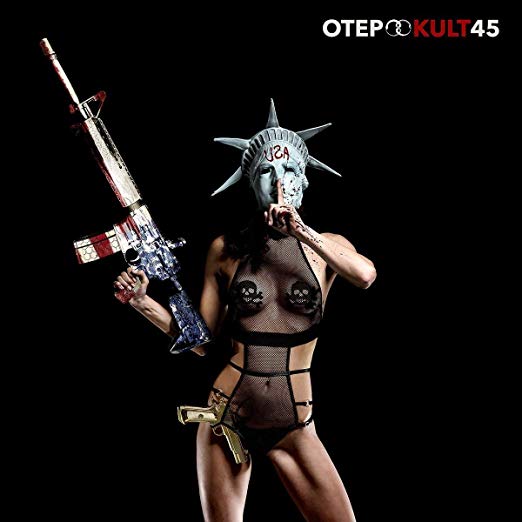 Great music has always had the power to motivate people, to get them to stand up and take notice, and to spur them to take action.  From Billie Holiday’s 1939 stand against racism with “Strange Fruit” to the protest songs of the sixties from Bob Dylan and Creedence Clearwater Revival,  music has played a powerful role in the political activism in our country.  Modern day bands like U2 and Rage Against the Machine have continued the trend with songs like “Sunday Bloody Sunday” and “Killing In the Name.” Fast forward to 2018 and there is one artist proud to carry on the protest tradition and that is OTEP.  Artist and activist Otep Shamaya has recently released her boldest political statement yet, “Kult 45.”

“Kult 45” is a call to arms against the political and social injustices rampant in today’s society.  Otep has never been one to shy away from difficult topics and this new record is no exception.  The short introductory track “Hail to the Thief,” featuring news footage leads into two songs that speak out against hate groups in “Halt Right” and “Molotov.”  Otep’s anger and fury are a force to be reckoned with as she sings and raps about school shootings in “Shelter In Place” and takes on the immigration debate in “invisible People.”  She does it all with the help of incredibly catchy rhythms and hooks that come to life in the songs.  The band puts on a precise, tight performance throughout the album with the crunching rhythm section of bass guitarist Drewski Barnes and drummer Justin Kier along with the  sick guitar leads of Aristotle.

Otep herself is absolutely brilliant from start to finish, commanding the songs and demanding your attention in an upbeat rap/rock style.  Changing it up just a bit is the softer piano driven “Be Brave” which has the vocalist holding back her screams and shouts, instead opting for a more low key, subtle approach.  An added bonus track “The Tribe Speaks” closes out the record with voice mail recordings from fans that have been profoundly affected by the music of OTEP.

With fire and fury, OTEP unleashes the beast with “Kult 45,” and delivers the  most important record of her career.